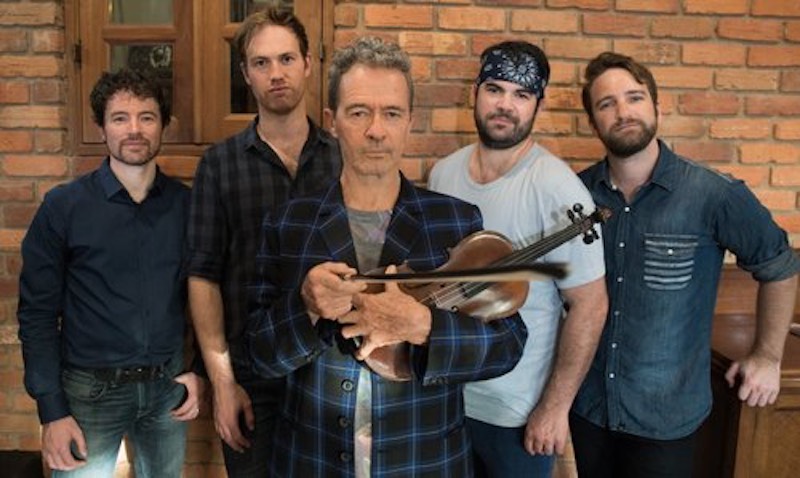 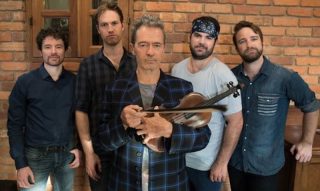 Golden Guitar Award winner and ARIA nominated Melbourne band Mustered Courage have themselves well established in the forefront of Australia’s folk and roots scene. Known for pushing the boundaries of what progressive folk-rock and especially bluegrass music, can be, they convinced prolific rock and roll songwriter, performer and Choirboys founder/singer, Mark Gable to record and perform Run To Paradise with a bluegrass twist. The result gave the song a new lease on life engaging an entire music community that may not be so familiar with the song first made famous in 1988 by Choirboys.

After a chance meeting in the main street of Tamworth during 2012’s Country Music Festival, with Mark introducing himself and praising the band for their work, never did the pair think it was the start of a magical music collaboration.

Being a young band and our first ever trip to the Festival, it really meant a lot to us – Julian Abrahams.

The pair continued to cross paths for many years in Tamworth and in 2014, the band managed to convince Mark to join Mustered Courage on stage at one of their Tamworth shows to perform a bluegrass arrangement of Gable’s successful single. Needless to say, Mark was all in and the audience were in raptures.

The chord progression lends itself very well to the traditional bluegrass sound so it made a lot of sense and Aussies love this bloody song and we loved delivering a version that the country and bluegrass people could get into as well. That audience absolutely brought the house down after we played it with Mark – Mustered Courage.

Featuring Nick Keeling on banjo, Julian Abrahams on guitar, Josh Bridges on double bass) and Josh Bennett on mandolin, Mustered Courage’s steady rise and insatiable work ethic caught the attention of Lost Highway Australia who signed the band to a worldwide recording deal in 2014. The signing was consummated with the release of a rootsy cover of Seal’s Kiss From A Rose which garnered further accolade from not only Seal himself but fans and media alike with Rhythms Magazine raving, “the four-part harmonies are right on the money. And the string picking, whether lightning fast or mellow and relaxed, is incendiary.” The single also featured an original instrumental B-side titled ‘Candle Creek’ which earned them merit,  giving Mustered Courage their first Golden Guitar Award for Instrumental of the Year at the 2015 CMAA Music Awards.

That same year, the band released their third album White Lies & Melodies – their first album via Lost Highway, which earned the band a nomination for ARIA Country Album of the Year.

This is the band’s first new recording release since 2015 and leads the way for a new album release in September 2018. Keen to involve fans in the band’s next recording venture, Mustered Courage will begin a crowd-funding campaign via their official website in the coming weeks.

We have such a ball spending time with Mark and the music video was an absolute hilarious blast to shoot. His energy and sense of humour is second to none, and what a voice. Mustered Courage fans are no strangers to us doing left of centre cover versions, so we think this should be a nice addition to our repertoire. Maybe even a new country anthem that opens the doors of Aussie rock fans to a genre they don’t yet know they love. Time will tell… bluegrass paradise – Julian Abrahams.