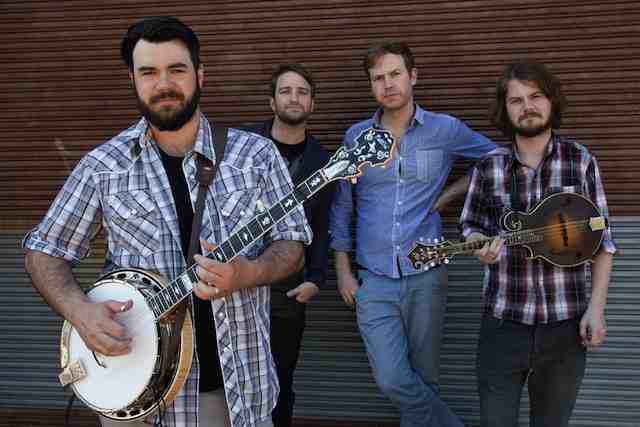 A short while ago we brought news of a new album from Mustered Courage an alt-bluegrass band hailing from Melbourne. I have not seen the album yet, but this band’s popularity is developing as is their original repertoire and it’s all looking good for their future.

The boys headed out to the Old Geelong Gaol recently to shoot this video clip. They can be seen here clothed in grey prison suits with their respective mother’s birth dates printed on the breast pockets. They described the day as: trashing prison cells, pausing to reflect on their wrong deeds and hiding out from the 39 degree day behind a foot-deep solid bluestone walls.

Long time friends Texas born Nick Keeling and Aussie Julian Abrahams started performing together in a hip-hop band while studying Jazz music in Canberra. Of course as we all know this naturally leads one to go off start a bluegrass band. Mustered Courage features lead vocalist Nick Keeling on banjo, Julian Abrahams on vocals and guitar, Josh Bridges on vocals and bass and Paddy Montgomery on mandolin. Highly regarded and in-demand Melbourne Dobro player Pete Fidler appears in the clip also.

Folks this is as good as modern bluegrass gets.

Cruel Alibi is a beautifully crafted song lamenting some of the choices we make in life.  It’s a story about separation of friendship, written from the perspective of a couple losing their love. What to say when the truth is too brutal; the art of carefully avoiding hurtful reasons but still managing to wound the target anyway.

It starts out as a slow-paced bluesy style ballad, then quickly kicks into bluegrass mode. The solo breaks in this track are nothing short of splendid. From the chromatic machine gun fire delivered from Keeling’s banjo, the super hot flatpicking from Abrahams guitar, the soft sweet sound of Fidler’s Dobro and Montgomery’s manic yet highly tasteful mandolin chops, this is just the perfect combination of sweet and frantic blended together to deliver Cruel Alibis. Folks this is as good as modern bluegrass gets.

Here is a clip of their new song Cruel Alibis. When it comes to the modern bluegrass sound, this band of highly talented musicians has it nailed.

In the dangerous search for middle ground, Mustered Courage manage to find the link between Bill Monroe and Mumford  & Sons, with just the right mix of mirth and mournful. If Mustered Courage are this good a year after formation, I can’t wait for album two. – Music Australia  Guide

The music may have a bluegrassy charm, but it is unfailingly relevant. With its string heavy, bluesy instrumental line and its pure and charming vocal harmonies, it’s difficult not to love these guys… Four stars – The Herald Sun

Catch them here on their Cruel Alibis – 2013 Single Launch Tour: