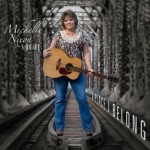 Mountain Fever Records has announced that they have signed long-time bluegrass favorite, Michelle Nixon & Drive to their label and will release their debut CD, A Place I Belong on 12th July 12th. The first single, Your Kind Of Love is available now.

Michelle Nixon is no stranger to the stage when it comes to soulful singing. The Virginia native grew up surrounded by music, began singing in church and joined her first band at the age of 14 embarking on a musical journey that found her singing a variety of gospel and classic country music. Gathering inspiration and style from, among others, Loretta Lynn and Emmylou Harris, Nixon quickly developed her own powerful sound and won the Virginia Female Vocalist of the Year award in 1990 and 1991. Through a recording collaboration with bluegrass artist Malcolm Pulley, Nixon discovered her love of bluegrass music and founded her own band, Michelle Nixon and Drive in 2002, making a lasting impression on the bluegrass world. In 2006, Nixon won the Female Vocalist of the Year awards from the Society for the Preservation of Bluegrass Music of America (SPBGMA) and later that year was honored to be part of the Daughters of Bluegrass album, Back To The Well which won the International Bluegrass Music Association’s Recorded Event of the Year. In 2009, The Daughters of Bluegrass took home the award again for the song, “Proud To Be A Daughter” from their follow-up album, Bluegrass Bouquet.

At the height of a successful career, Nixon suffered a devastating loss that affected her deeply, when her father passed away. During her hiatus, Nixon focused her attention on her now 20-year marriage to fellow musician Nick and their three children, Tia, Chip and Trace. Now that her youngest child is nearing the end of high school, Nixon felt it was time to get back to bluegrass and the fans that she has missed so much. Word of a potential bluegrass come-back eventually got to Mark Hodges at Mountain Fever Records who recognized Nixon’s talent and the void she left during her time off the road.

After I lost my dad a few years ago, it really rocked my world and I just had to take a long look at myself and make sure my priorities were in the right order because you only get one chance at it all. I really needed to follow my heart and make my family first in my life. When Mark contacted me and wanted to talk about being part of the Mountain Fever label, it really got my fire going again. I think they are a great bunch of people and I felt it was a great fit and Mark Hodges felt the same way – Michelle Nixon.

We are very proud to have Michelle Nixon join our family here at Mountain Fever,” he states. “We’ve been fans of hers for a long time and we feel honored to be chosen as the label to welcome her back to bluegrass – Mark Hodges – Mountain Fever Records.

With her new found relationship with Mountain Fever records in tow, Nixon began working on putting together a new version of her band, Drive, and brought her husband into the mix for the first time. In addition to husband Nick Nixon on guitar and vocals, Drive will also consist of returning band member Patrick Robertson on guitar and vocals; Tim Newcomb on banjo; Mike Sharp on dobro; Jonathan Dillon on mandolin; and John Wade on bass.