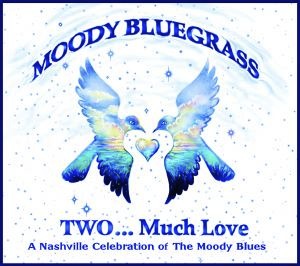 Bluegrass is Love Too, “Two Much Love“

4 years in the making and featuring 48 Nashville artists as well as all 5 members of The Moody Blues, this new album Moody Bluegrass Two, Much Love is a Nashville Celebration of the Moody Blues.

For the first time in over 30 years, Justin Hayward, John Lodge, Graeme Edge, Ray Thomas & Mike Pinder appear on the same record. You can hear Justin, John and Graeme sing one of their original songs Bluegrass Style.

Hear Ray play his “Fluegrass” and Mike add his charm with “Mellotron/Mellograss/Bluetron”. Have you heard Ronnie Bowman’s stellar performance on The Story In Your Eyes? It’s already number 13 on the Bluegrass Unlimited Chart.

This album is produced by David Harvey and well worth a nomination for Recorded Event of The Year in the coming IBMA Awards this year.