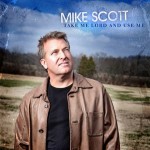 One listen to the title track, Take Me Lord and Use Me, co-written by the husband and wife songwriting team, Mike and Brenda Scott, and listeners will immediately feel the outpouring of faith and passion Mike Scott has put into this album.

Mike Scott has a long history in American acoustic music, having been on stage as an entertainer at the age of 10 in 1972. Since then, Mike has gone on to perform with Danny Davis & The Nashville Brass, led Mike Scott & The All-American Band. Mike also helped to define the tradition of Jim & Jesse and The Virginia Boys. Since 2001, Mike has been a featured artist with frequent appearances on RFD’s Blue Highways TV show, Reno’s Old Time Music Festival (seen in over 25 million households) as part of Ronnie Reno & The Reno Tradition.

Mike Scott’s exceptional playing and singing brought a fresh touch to the classic gospel tune, ‘Since I Laid My Burdens Down.’  The angelic harmony singing of Sonya Isaacs puts it over the top – Les Butler, Host of the Front Porch Fellowship.

Listen to a sample of Since I Laid My Burdens Down:

Since I Lay My Burdens Down