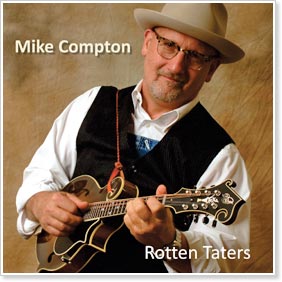 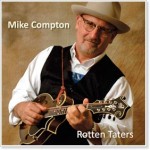 Rotten Taters is a snapshot of some of the material Mike Compton has begun to present through his solo endeavors. It’s a project which, for the first time, lets us see something that we’ve only glimpsed in the past – Compton playing by himself, unaccompanied and undirected. It’s simply stellar;  for Compton, it’s all about rhythm, with the mandolin serving principally as a rhythmic instrument rather than a melodic one. These days, for this style of playing, he is the player that all others are compared to; if you play old-time or traditional bluegrass mandolin, you want to play like Mike Compton.

Here, for the first time, is pure, unadorned Compton. Of the fifteen songs and tunes here, six are from Compton’s own pen. Tracks like “How Do you Want Your Rollin’ Done” and “I’ll Tell you About the Women” seem, in a sense, like portraits of Compton himself, his effervescence and humor laid bare. Of note, the cut “Forever Has Come to and End” is stark and longing, excellently accompanied only by mandolin chords and cross-picking, bringing out the desperation of the lyric. “Jenny Lynn” is a tribute to Monroe, staying close to Monroe’s style, as is the original piece “Wood Butcher’s Walkabout”, which is like a master class in the slides that are a hallmark of Compton’s playing.

Mike has taken a passel of influences – old time fiddle tunes, rock salt and nails bluegrass, the aching allure of the true Delta Blues – to create one of the most recognizable and respected mandolin voices anywhere – David McMcCarty- Mandolin Magazine.
For someone playing solo traditional tunes on mandolin this is just about as good as it gets for me – Scott Tichenor Mandolin Cafe.
A new bluegrass instrumental hero – The New York Times.

Instruments Used on This Recording: