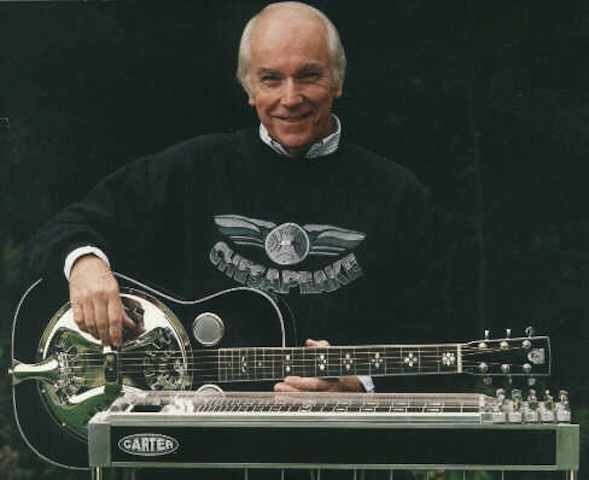 Rob Ickes has sent through news of a special concert to be held in memory of Mike Auldridge.

On Feb. 12, I’ll be participating in a special performance of Mike Auldridge music at The Birchmere, along with other friends of Mike, including Jerry Douglas, Emmylou Harris, David Bromberg, John Starling, Tom Gray, Fred Travers and The Seldom Scene, Sally Van Meter, and many more. If you are in range, I hope to see you there – or if the Birchmere is too far, I hope you’ll join us in spirit on February 12 to celebrate this legendary life – Rob Ickes.

Mike Auldridge’s elegant musicianship forever changed the sound of the Dobro in American roots music. With the Seldom Scene, Chesapeake and others, he starred on hundreds of Birchmere evenings, and his death on Dec. 28, 2012 marked the passing of one of the DC area’s greatest creators, most influential players, and most cherished friends.

Some of Auldridge’s own cherished friends will gather Tuesday, Feb. 12 at The Birchmere for a night one more unforgettable night of Mike Auldridge music. Jerry Douglas, Emmylou Harris, David Bromberg, Rob Ickes, John Starling, Tom Gray, The Seldom Scene and other greats will sing and play songs and praises.

“One well-placed note from Mike could transform a primitive folk ballad into a modern piece of music full of hope for the future,” says Douglas, who completed a one-of-a-kind Dobro trio album in 2012 with Auldridge and Ickes. “He was my hero.”

Building on the work of his own heroes, including Uncle Josh Graves, Auldridge found a refined and nuanced new voice for the instrument. That voice fit perfectly into the Seldom Scene, a band that brought a progressive sophistication to bluegrass and that has been a centerpiece of the Washington acoustic music scene since the band’s founding in 1971. The Scene was The Birchmere’s house band, playing each week and delivering an expansive, urbane brand of bluegrass that drew raves from musicians and fans and, perhaps most remarkably, bi-partisan support from politicians.

“It was clear: Mike Auldridge had set a new standard for tone on the Dobro,” said Rob Ickes in 2007, when he presented Auldridge with the International Bluegrass Music Association’s Distinguished Achievement Award. “To this day, that tone is the holy grail of contemporary resophonic guitar players.”

Soon, Auldridge was playing Dobro on albums for others, both in and out of bluegrass, including Emmylou Harris, Linda Ronstadt, Lowell George, Vassar Clements, and Tony Rice. He would go on to record with many, many more, and to tour with Harris, Lyle Lovett, Darren Beachley and others. He exited the Scene in the mid-1990s, working with Chesapeake and maintaining a regular area presence as a performer, session player and teacher. In 2012, he received an NEA National Heritage Fellowship award for his contributions to the nation’s traditional arts.

The Feb. 12 show won’t be a somber affair. It will be a reunion of Mike’s friends and admirers (they are the same), an exploration of his musical brilliance and import and a landmark live concert: A once-in-a-lifetime event, celebrating the remarkable lifetime of Mike Auldridge.