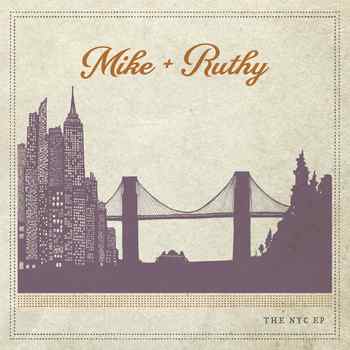 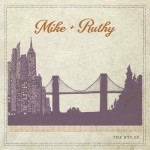 Folk roots duo Mike and Ruthy are celebrating the release of  The NYC EP, a collection of six songs featuring the premiere recording of Woody Guthrie’s “My New York City”.  In honouring Woody’s 100th birthday, Mike + Ruthy were invited by Woody’s daughter Nora to finish and record one of the many previously unrecorded songs housed in the Woody Guthrie Archive.  The couple, who met and fell in love in New York City, immediately connected to the lyrics of Woody’s deceptively simple love song:

Mike and Ruthy have been performing as a duo for thirteen years, and married for six. They perform timeless folk and blues music with mainstream appeal. Their concerts celebrate the soul of Americana through witty, spellbinding stories and songs featuring fiddle, banjo, guitar, ukulele and their hallmark, white-knuckle-tight harmony singing.

As our new melody notes and chords began to take shape we became even more affected by the beauty of Woody’s words. It sounds like he wrote the words for a loved one, but now, as we sing them, it feels like a song to Woody himself.  It’s a huge honor to sing this song – Ruthy.
It’s always exhilarating to perform a new song, especially when it receives such a powerful response as became the case with ‘My New York City.’  We wanted to record it as soon as possible – Mike.

Joining Mike and Ruthy is bassist Jacob Silver and drummer Robin Macmillan, life-long friends who converted their Williamsburg loft into an analog recording studio and recently began issuing 7″ vinyl releases under the imprint Media Blitz Record Company.  They invited Mike and Ruthy down for a session where they would back up the duo on a handful of songs, two for a 7″, with the extra songs to be included on a digital download card.  One session turned into many and the four musicians, who frequently tour together, harvested five more spirited tracks to accompany the shimmering new Woody premiere.

Ours is the third release in their series which so far has focused on young folk singers from the NYC area.   With Media Blitz being a boutique label focusing solely on vinyl and downloads and interest in these songs being so strong, they agreed to let us print and promote the release on CD as well through our own independent label, Humble Abode Music.  With Woody as our inspiration, we’re ecstatic to see how far this home grown music will go – Mike.

Along with “My New York City“, which features Woody’s music and lyrics with additional music by Mike and Ruthy, The NYC EP includes the following songs:

“On My Way Home” – This infectious banjo-driven tune has become one of Mike and Ruthy’s top live songs.  The uplifting song celebrates finally getting to a good place after years of struggle.

“Romance in the Dark” – Mike and Ruthy originally learned the song from a Nina Simone recording, but soon discovered it was written in 1940 by the Chicago blues singer, Lil Green, who died at the age of 34.

“Toast My Memory”– This is a road song Mike and Ruthy rehearsed in the car while travelling all the way down I-87.

“Oh Mama” – While the lyrics to this blues song speak to a number of situations; they were in fact, inspired by the couple’s son Will.  He was one year old, he didn’t want to take a nap, and the only thing he could verbalize was “Oh, Mama”

Mike and Ruthy met in New York City, just out of college. Daughter to Hudson Valley fiddling legend Jay Ungar and folk-singer Lyn Hardy, Ruthy’s was a past steeped in the folk tradition. Mike had his musical roots planted in the indie rock scene blasting from WUNH in his hometown of Durham, NH. The two fell in love and went on to form the folk-rock behemoth The Mammals with Tao Rodriguez-Seeger. Mike + Ruthy toured extensively as part of The Mammals for seven years with concerts across the U.S. and trips to Australia, Denmark and Canada.  Now settled just outside Woodstock, NY, they tour with a full band or as a duo and sometimes share the stage with their show-stealing four-year-old son, Will. They recorded their first duo album, The Honeymoon Agenda, instead of going on a Honeymoon, and followed that up with the acclaimed Waltz of the Chickadee and the fan-funded, Million to One, which rose to the top 20 on the Americana music charts in 2010.

Mike and Ruthy have been friends and collaborators with the Guthrie family for many years. (“They are a vastly talented and loving bunch,” says Ruthy.) Their band The Mammals enjoyed a six month stint opening for and backing up Arlo Guthrie during his “40th Anniversary of Alice’s Restaurant” tour which culminated at New York’s Carnegie Hall.  Arlo’s daughter Sarah Lee Guthrie and her husband Johnny Irion have been close friends of the couple; they performed at Mike + Ruthy’s wedding and have set a shining example by also raising their kids on tour.

The adventure began with a magical document from the Guthrie Archive. We fooled around with the melody and quickly found a deep connection to “My New York City.” It was obvious that we had to travel down-state to record with the boys [Jacob Silver and Robin MacMillan]. The 1-inch tape rolled and the songs flowed free and wide like the mighty Hudson. And then, like the tidal river, things seemed to eddy and flow back upstream for a minute. Was this a two-song vinyl release or the beginnings of a full record? The answer came over late night beers with some long-time road cohorts. The NYC EP is a moment in time and space, a spirited session in Williamsburg, Brooklyn with wrinkles and rough edges intact. – Mike + Ruthy liner notes to The NYC EP

Mike and Ruthy’s The NYC EP, HAM 013, retails for $10, and may be purchased through mikeandruthy.com or iTunes.

Media Blitz Record Company will release “My New York City” and “On My Way Home” as a vinyl 7”.  Mike + Ruthy’s version of “My New York City” will also be part of a 4-CD collection of Woody’s New York songs entitled “My Name is New York” to be released in June 2102, by Woody Guthrie Publications.  Other contributors to the compilation include Arlo Guthrie, Bob Dylan and Pete Seeger.

The “My New York City” recording is just one of many events celebrating Woody Guthrie’s 100 birthday.  The Grammy Museum is partnering with the Guthrie Family / Woody Guthrie Publications, Inc. and the Woody Guthrie Archives to create the Centennial celebrations. The year-long celebration will include a host of concerts, programs and events taking place throughout the country and across the pond.  Mike + Ruthy will be performing alongside many other stellar musicians at one such Gala in Brooklyn this September. For more information, please visit Woody100.com.

You may see and hear more at mikeandruthy.com.