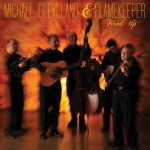 A special World Premier of the project with radio presenter, Katy Daley will air later this month on WAMU’s Bluegrass Country as well as a Track By Track with Kyle Cantrell on Sirius/XM.

Fired Up is a culmination of years of listening, playing and singing some of the greatest music in the world.  Drawing from traditional bluegrass and country writers such as Rabon Delmore, Jimmy Martin, Buddy Spicher, Tom T. Hall, Dudley Connell, David McLaughlin, Webb Pierce and Tommy Hill, Flamekeeper has also tapped into a plethora of talent within their own band with contributions from Tom Adams, Marshall Wilborn, Jesse Brock and former member, Jessie Baker.  The song selection on Fired Up is purposely diverse.  “Each of us holds a deep reverence for the music that has come to us through the many studio and live recordings of the first generation of bluegrass artists,” states Flamekeeper member Tom Adams.  “Our music is inextricably linked to those who blazed the trail on which we now travel. Their music, viewed today as traditional, was fueled by cutting-edge instrumental virtuosity and original compositions. Later generations of bluegrass bands, such as the Johnson Mountain Boys, continued to contribute in this way to the bluegrass canon.”

When listening to Michael Cleveland & Flamekeeper’s Fired Up, one can expect nothing less than precise and perfect instrumentation and the band certainly does not disappoint.  Case in point: Goin Up Dry Branch and Maine Line. What will come as a pleasant surprise to many is the emergence of this band as modern day poets through the project’s song selection.  From the tongue-in-cheek Monster Truck, to the beautifully written and sweetly sung Bigger Hands Than Mine, with guest vocalist Vince Gill, to the traditional sounds of Going Back To Old Virginia, Fired Up is proof that Michael Cleveland & Flamekeeper is a fiery force to be reckoned with for sure.

Michael himself is the bit of plutonium at the core of this particular reactor, one of the greatest improvising violin players in any style; each solo is on fire, and just jaw-droppingly creative.  The musicians in Flamekeeper are all spectacular and this coalition of amazing individuals truly achieves lift-off, and a kind of transcendence – from the album notes by Matt Glaser, Artistic Director, American Roots Music Program, Berklee College of Music.

Rounder Records will release Michael Cleveland & Flamekeeper’s Fired Up on 29th March. For more information on the band and their new CD, please visit www.FlamekeeperBand.com or www.Rounder.com.