Merle Monroe – Back To The Country 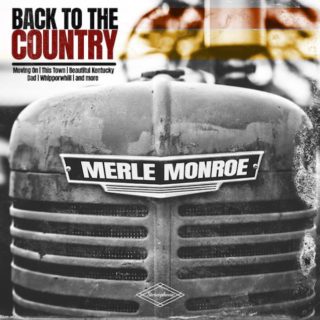 Merle Monroe was created by members Tim Raybon and Daniel Grindstaff. On the 12-song collection, the dynamic group show exactly why Country legend Merle Haggard and Bluegrass icon Bill Monroe are the inspirations behind both their band name and signature sound.

Fans can pre-order the new project here, where they’ll also be able to download and stream the lead single, This Town now.

American Music- the Carter Family, Bill Monroe, the Osborne Brothers, Jim and Jesse, Merle Haggard, Roger Miller, Flatt & Scruggs, and many others. The sounds of the great pioneers was our inspiration to record this album and form this band. Respectfully, we do our part to create something new, yet reflective of our hero’s influences and carry the torch with every song we write and sing” – Tim Raybon & Daniel Grindstaff.

The first single from Back To The Country is This Town. The upbeat track is a remake of classic Country artist Roger Miller’s song recorded for the 1965 album, The 3rd Time Around. Merle Monroe brings a new and invigorating sound, showcasing both Tim and Daniel’s hard-driving Bluegrass style. From start to finish the group trades notes and harmonies, giving genre enthusiasts a taste of what’s to come on the full LP. With years of experience, Daniel’s frequent performances at the legendary Grand Ole Opry serves as the guiding inspiration behind This Town. The song and video made its premiere earlier today on Vents Magazine.

Back To The Country consists of 12 tracks, including a combination of covers, along with all-new music written by the band. Band member Tim is no stranger to success, having previously released a Gold-certified single in the 90s of Butterfly Kisses. One standout song on the project is the first track, Movin’ On, a chart-topper previously released by Merle Haggard. Another key moment occurs on the feel-good Tim Raybon written Singing Crazy (Like Patsy Cline), which drops a line about the late great Patsy Cline. Perhaps the most heartfelt song is Dad, written by Skip Ewing. As a special treat for fans, the track will be officially available ahead of the album’s release, before the Father’s Day weekend.

Merle Monroe is pushing their promotional efforts into high gear as the album approaches. They will appear at The Birthplace of Country Music Museum in Bristol, Tenn. on Saturday, April 27, where they will premiere new music. On May 8, Nashville fans will be able to attend a very special album release show at The Station Inn. During the event, concert attendees will hear new music performed for the very first time. With the recent addition of Derek Deakins to the band (worked with Blake Shelton and the Osborne Brothers for five and three years respectively), Merle Monroe is more determined than ever to make 2019 their breakout year. To celebrate, they will also appear on the legendary WSM’s All Nighter With Marcia Campbell. Fans can listen in locally on 650-AM (broadcasting from Nashville to 38 states, plus part of Canada), or stream online at wsmonline.com.

To learn more on all things Merle Monroe visit the group’s official website.

Back To The Country Track Listing:

Pinecastle Recording artists Merle Monroe is a band created by musicians Tim Raybon and Daniel Grindstaff. Basing their sound from collective experiences as professionals in the music business, which essentially is a mix of vocally centered, hard-driving Bluegrass, all along tearing at listeners’ heartstrings like a Merle Haggard style ballad. Merle Monroe believes Bluegrass, Gospel and traditional Country music are America’s music, the stories of the common man and the sounds of the mountains. Adding the superb talents of Jayd Raines, Josh Doss and Derek Deakins, the goal is to choose songs that relate to everyday life and go Back To The Country, be that with heartfelt vocals, a ballad, a hard-driving banjo, or an upbeat song that takes your mind away from today’s current distractions.