Mac Wiseman – I Sang The Song 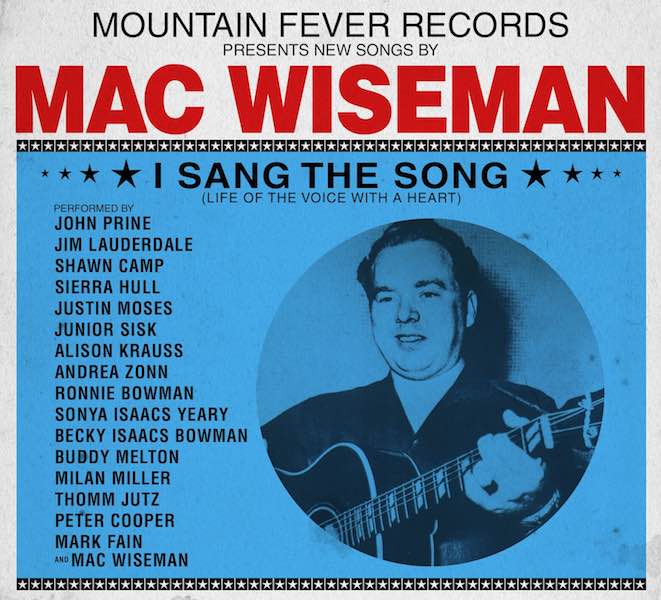 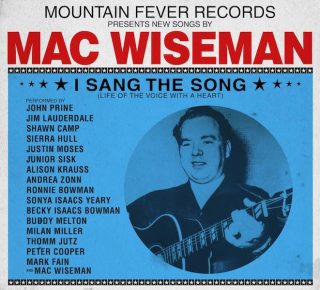 Mountain Fever Records has released a star-studded concept-album celebrating the life and spirit of Country Music Hall of Fame member Mac Wiseman. I Sang the Song (Life of the Voice with a Heart) will be released January 20, 2017. The first single, “Going Back to Bristol,” featuring the International Bluegrass Music Association’s 2015 Male Vocalist of the Year Shawn Camp, is available today.

What began as a casual weekly visit among friends quickly morphed into an unprecedented album project. Over nine weeks, Country and Bluegrass Hall of Famer Mac Wiseman met with Peter Cooper and Thomm Jutz, sharing intimate details of his 91 years, and of his journey from Virginia boy to American roots music icon. That journey is the subject I Sang the Song, the joyful and poignant album that springs from Mac’s storytelling sessions.

In liner notes, Cooper writes, “The stories would have been remarkable coming from anyone. But coming from Mac Wiseman, an acknowledged master of American roots music who earned the nickname ‘The Voice with a Heart,’ the stories began to sound like songs. Thomm Jutz and I sat in small chairs that faced the easy chair, situated beneath a photograph of Pleasant Hill Church of the Brethren, Mac’s childhood place of worship. We wrote down the stories, and found them rich with melody and rhyme.” 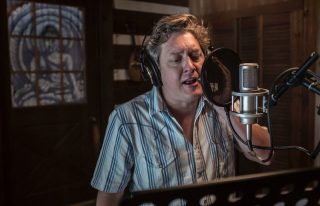 The result is ten carefully crafted songs, sung by an adoring assembly of extraordinary artists, capped by Mac Wiseman’s duet with Alison Krauss on his classic “’Tis Sweet to be Remembered.”

Singer-songwriter Shawn Camp provides the first single from I Sang the Song. “Going Back To Bristol” recounts Wiseman’s affection for a place he’s always held close to his heart. “It’s the birthplace of the music that’s the wellspring of my soul. …the last time I was back there, someone told me ‘Welcome home,’” Camp sings, impeccably, in a voice at once youthful and renewed, rooted and reverent.

I’ve been a fan of Mac Wiseman’s all of my life. He has always had a natural ability to tell a story in a song, and make you believe it. I know these stories are Mac’s real-life, true stories. I hope our voices are half as believable as his always has been to us – Shawn Camp.

Listen to “Going Back To Bristol“.

“Going Back To Bristol” is now available to radio via AirPlay Direct or a direct digital download by emailing a request to radio@mountainfever.com. Consumers may buy the single and pre-order the album via iTunes, Amazon, and Google Play. For more information on Mac Wiseman – I Sang The Song (Life of the Voice with a Heart), please visit www.mountainfever.com.

Famed for a clear, mellow tenor voice that conveys empathy, kindness, and understanding, Mac Wiseman has been recording great American music for seventy years. He is part of bluegrass music’s first generation, having played in Bill Monroe’s Blue Grass Boys band and in Flatt & Scruggs’ Foggy Mountain Boys, and having sung lead on Monroe classics including “Can’t You Hear Me Callin’” and “Travelin’ This Lonesome Road.” In 1951, he launched a marvelous solo career with “’Tis Sweet to be Remembered.” He helmed Dot Records’ country division, he helped form the Country Music Association, and he became, in Kris Kristofferson’s words, “One of the heroes” of American roots music. I Sang the Song is the first album fully composed of Mac Wiseman’s own words and melodies. Mac Wiseman is a member of the Country Music and Bluegrass Music Halls of Fame.