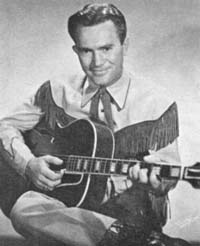 Horace Eldred (Danny) Dill, died Thursday at age 83.
His parents named him Horace Eldred Dill but his fans called him Danny Dill. Born in Tennessee, Mr. Dill co-wrote Long Black Veil with Marijohn Wilkin. That song has been recorded by Lefty Frizzell, Johnny Cash, Jerry Garcia and a myriad of others. The song has also become a favourite ballad within bluegrass circles.

Opry fans from the 1950’s will recall Danny Dill as part of the Annie Lou and Danny act that played the Opry for many years. Later on, country music fans would come to know Danny for some of the country classics he wrote such as Detroit City.

Danny Dill co-wrote the song Long Black Veil as though singer was speaking from beyond the grave. In that song, the narrator sings of a man who was sentenced to death on a false murder charge. The man couldn’t state an alibi to the judge, as he was in the arms of my best friend’s wife on the night of the slaying.

…She walks these hills in a long black veil,
She visits my grave when the night winds wail,
Nobody knows, nobody sees,
Nobody knows but me…