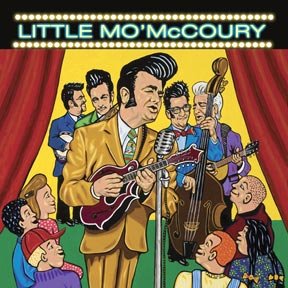 Ronnie McCoury’s fondest childhood memories are ones he has of accompanying his father-the iconic Del McCoury-to bluegrass festivals, experiencing early on the way that music can bring parents and kids together. Now that he is a highly accomplished artist (and father) in his own right, Ronnie-joined by the Del McCoury Band, of which he is now a longtime and prominent member-has recorded an unprecedented album that will allow families everywhere to experience together this quintessential American musical form.

It’s fitting that this album bound to bring families together comes from one of Americana’s first families. The McCoury legacy extends back 40 years to when Del was one of Bill Monroe’s Bluegrass Boys, up through the Del McCoury Band’s 2006 GRAMMY for Best Bluegrass Album. In addition to Ronnie and Del, Little Mo’ McCoury (as in “just a little more McCoury”) includes contributions from Ronnie’s brother Rob and Ronnie’s wife Allison, with whom he co-wrote “My Friend, My Guitar,” a song Ronnie figures is a “good way to get kids to learn how to play a G-run.” Rob’s roles on the album are numerous: He helped with song choices, takes the lead on an interpretation of Earl Scruggs’ “Mama’s Blues,” and plays banjo throughout the recording. The band’s other members, fiddler Jason Carter and bass player Alan Bartram, are also featured.