Lady Of Tradition Receives A Key 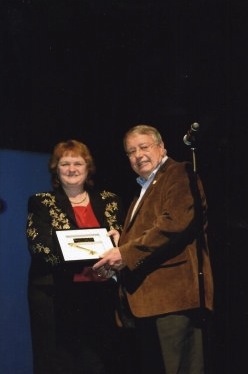 Bluegrass’ Lady of Tradition, Lorraine Jordan and banjo player for IIIrd Tyme Out, Steve Dilling, were presented the key to the city of Garner, NC on 31st December, 2011.  Both musicians live in nearby Raleigh, NC. The band leader for Carolina Road, Jordan, performed with her band alongside label mates, Russell Moore and IIIrd Tyme Out at the Garner Performing Arts Center for the “Key to the City” ceremony. The artists, both signed to Rural Rhythm Records, were given the prestigious gift by Garner Mayor Ronnie Williams.  Garner is also the hometown to the latest American Idol winner, Scotty McCreery.

Jordan continues to bring music to the North Carolina community with Bluegrass Thursdays at the Hope Cafe in Raleigh, NC.  Jordan operates the coffee shop where her band, Carolina Road plays host to some of the biggest names in Bluegrass and upcoming shows include the talents of Danny Paisley and Southern Grass, James King Band, Lonesome River Band, Steve Dilling, Junior Sisk, and Darell Webb Band.  Please visit hopecaferaleigh.com for more information on the Hope Cafe and Bluegrass Thursday Nights.

Lorraine Jordan and Carolina Road have become America’s premier bluegrass band with the success of their second album with Rural Rhythm Records, Back to My Roots. The 12-song release takes the band back to the their traditional hard-driving sound and the album is currently number 6 on the Bluegrass Music Profiles Album Chart, number 30 on the Bluegrass Unlimited Album Chart and number 4 on the WNCW Album Chart. Along with the incredible success of their album, The Lady of Tradition and her band continue to maintain a busy tour schedule; averaging 60 bluegrass festivals in the U.S. and Canada annually. Please visit their website at www.carolinaroadband.com for upcoming dates.