Kruger Brothers to Premiere The Spirit of the Rockies 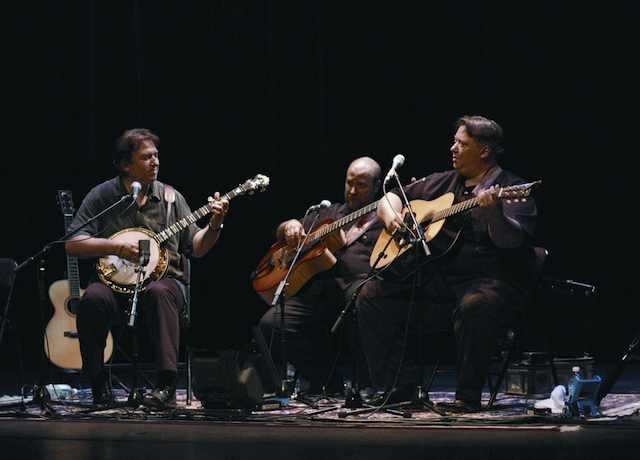 The Kruger Brothers will premiere Jens Kruger’s The Spirit of the Rockies August 25 at the Banff Centre in Banff, Alberta, Canada.  The band, comprised of Jens Kruger, Uwe Kruger and Joel Landsburg, has become celebrated worldwide for its seamless fusions of jazz, classical, folk and bluegrass.

Commissioned by the Banff Centre, The Spirit Of The Rockies is a symphonic piece for chamber orchestra, guitar, bass, and banjo.  The composition demonstrates not only Kruger’s talents as a composer, arranger and performer, but also his singular ability to combine seemingly disparate cultural and musical traditions within his work.  In this performance the Kruger Brothers will be joined by the Banff Centre’s chamber musicians in residence.

Representatives of the Banff Centre approached Kruger after hearing The Kruger Brothers’ 2010 album, Appalachian Concerto, a thematically integrated work for banjo, bass, guitar and string quartet.   There Kruger used the concerto format to draw comparisons between the music of Europe and the traditional music of the Appalachian Mountains and to comment on the area’s cultural history.

In The Spirit of the Rockies, Kruger’s theme is the natural beauty of the region.  “For the English,” he says, alluding to the first Europeans who settled in the Rockies, “the wilderness was something to be conquered.  Trade routes, rather than ski trails, were what they were after.  When the railroad opened up the continent, new settlers came in with a very different perspective, one that appreciated the uniqueness and delicacy of the environment.  It was a perspective embodied in the Swiss guides who were the first to blaze the hiking and ski trails and build the mountain retreats that are now emblematic of the region. They brought an awareness of beauty.”

It is those themes—appreciation, preservation and discovery—that provide a focus for Kruger’s work.  “The Spirit of the Rockies,” says Kruger, “is our own falling in love and our own understanding of beauty and of the fact that we are part of this world, and it is a part of us.”