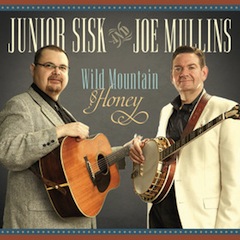 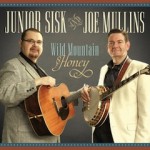 News just in from Rebel Records:

Though Joe Mullins hails from Southwest Ohio and Junior Sisk grew up hundreds of miles away in Southwest Virginia, their mutual love of classic bluegrass music and its creators connects them like long lost brothers. It is only fitting that these two men should join together to honor the mentors whose work and sacrifices paved the way for their own rise to the top. They do just that, and more, with Hall of Fame Bluegrass – a tribute to members of the IBMA Hall of Fame.

To sing and play music I love with Junior Sisk – what a soul! Our shared passion for first and second generation Bluegrass has inspired us to record this collection of songs. Some are old favorites, others are rare gems – Joe Mullins

The idea for Hall of Fame Bluegrass was hatched after Joe joined Junior for a powerful duet on the Stanley Brothers classic “Lover’s Quarrel” from the latest Ramblers Choice CD, The Story of the Day That I Died, released earlier this year. Excited by their shared passion, the two began selecting songs and assembled a stellar band of like-minded pickers, all of whom are IBMA award winners themselves: Dudley Connell on guitar, Jesse Brock on mandolin, Jason Carter on fiddle, Marshall Wilborn on bass, and Rob Ickes on Dobro.

I am very honored to record a project with such a talented and wonderful person as Joe Mullins, as well as these great musicians  who shared their talents with us. They are some of my favorite. We hope this recording makes our pioneers in the bluegrass world proud – Junior Sisk.

The first single from their album, “Wild Mountain Honey” is available today. A quick look at the song selection for the album will give you a good idea of just how familiar Joe and Junior are with the recorded repertoire of all the giants of the genre. From literally hundreds of possibilities they have selected a neat variety of songs—some lesser known but all classics in their own way. “Wild Mountain Honey” was a favorite up-tempo song from the first (and many think the best) album released by The Osborne Brothers & Red Allen, (who entered the Hall of Fame in 1994 and 2005 respectively).

The single is available as a download on iTunes, Amazon and other online music stores. The full-length album will be released on 22nd October, 2013.