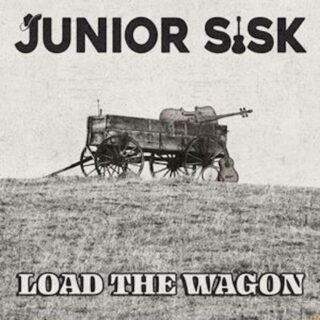 Junior Sisk, has released Load The Wagon, on Mountain Fever Records. The album has been in the #1 position on the Bluegrass Unlimited National Bluegrass Survey, for an unprecedented six consecutive months now.

This first record out for Junior with his new band formation, including the addition of his first ever female band member, Heather Berry Mabe, has far exceeded the already high expectations of everyone involved. In corroborating with Bluegrass Unlimited magazine, Load The Wagon has joined a very small and distinguished group of artists, who have achieved the honor of six or more consecutive months in the number one seat on the survey.

We caught up with Junior from his tree stand, conducting his other very successful business – hunting:

I knew people were supporting and liking my new band and CD, but this is just awesome. I wish we could have been out on the road this year to recreate it all live for our fans. Thanks a million to radio and fans for their support. God bless – Junior Sisk.

A vast majority of DJs and radio programmers polled, have advised that this is Junior’s best album to date. A lot of time and effort was put in to carefully choose the material for Load The Wagon, and this top notch band does not disappoint in their brilliant arrangements and delivery of each composition. Also deserving of a mention, is that the album was a bit of a team affair, with fellow Mountain Fever label mate as well as Wilson Pickins roster member, powerhouse songstress and band leader, Amanda Cook, at the controls as engineer on this project at the Mountain Fever Records studio in Willis, Virginia.

We knew when we recorded this record it was going to be something special, and Junior always puts everything he’s got into a song. It’s the record he’s always wanted to make, and we are so thankful to have been a part of it – Mark Hodges, Mountain Fever Records.

Load The Wagon is available for purchase or streaming here.

Junior Sisk is widely recognized as one of today’s top bluegrass vocalists, and a constant reminder that traditional bluegrass is still alive and well. A longtime resident of the Virginia Blue Ridge, his bluegrass pedigree runs deep. Influenced by a father who wrote songs and played guitar and a mother who sang, Sisk first learned to play around age 14. His early influences included The Stanley Brothers, Larry Sparks, and Dave Evans, but he often credits the Johnson Mountain Boys with inspiring him to pursue bluegrass professionally.

Sisk first made his mark in bluegrass as a songwriter in the early 1990s, penning classic Lonesome River Band songs like Game (I Can’t Win) and Tears Are Blinding Me. As a member of Wyatt Rice & Santa Cruz and Blueridge, he helped define the sound of driving, modern traditional bluegrass. In 1998, Sisk founded the Ramblers Choice band, and released Sounds of the Mountains on Rounder Records. After leaving Blueridge in 2006, he reformed Ramblers Choice and began a successful career on Rebel Records.

His 2011 album Heart of a Song helped bring the band into the spotlight and earned the prestigious IBMA Album of the Year Award in 2012. Its single A Far Cry from Lester and Earl, which Sisk co-wrote, became a rallying cry for a resurgence of traditional sounds in bluegrass and additionally, received the 2012 Song of the Year Award from the IBMA. Sisk was further honored when he was named 2013 IBMA Male Vocalist of the Year, and his band earned the 2014 SPBGMA Bluegrass Band of the Year award. In 2016, Longneck Blues, a collaboration with noted singer-songwriter Ronnie Bowman, was named Recorded Event of the Year by the IBMA.

Most recently, Sisk received the 2017 Male Vocalist of the Year award from SPBGMA. In 2015, Sisk signed with Mountain Fever Records and has been happily turning out hit after hit for them ever since.