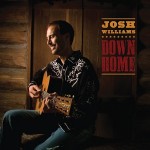 Voted IBMA’s Emerging Artist of the Year in 2010 and still the reigning Guitar Player of the Year, Josh Williams has all the spark and verve of a young Dwight Yoakam or a young Randy Travis and all the authenticity of bluegrass and country music at its deepest.

Williams is considered by many to be the most formidable young male vocalist in the Bluegrass/Acoustic music business.  He is known to some as one of the finest young guitar players to come along in a long time. He toured with Rhonda Vincent and The Rage on their grueling 300 days per year touring schedule, and was awarded SPBGMA Guitar Performer of the Year, every year from 2005 through 2010, as well as IBMA’s Guitar Player of the year in 2008 and 2009.

He is also enjoyed a stint as mandolin/fiddle player with the group Special Consensus, and early in his career, he was the hard driving banjo player for the group he fronted during his High School years, Josh Williams & High Gear.

Down Home perfectly spotlights the gifted guitar work, stunning vocals, and multi-instrumental virtuosity for which Williams is already justifiably revered. Here is an artist just reaching the peak of his powers. Josh Williams is one of the bright young stars of the bluegrass world – Rounder Records.

Originally released in February 2010 on Pinecastle Records, Down Home ended up becoming one of the label’s last releases.  Sadly, Pinecastle’s owner’s health issues forced the label to suspend operations that same month, and while the album was released, the label was unable to provide promotional support.  Rounder has since picked up the album and is pleased to be giving it a proper release.

To Williams, Down Home is a labor of love.  Having already released two solo projects as well as several releases with his former bands Josh Williams & High Gear, Special Consensus, and Rhonda Vincent & The Rage, he felt ready to take the reins and produce the album.  Down Home took more than two years to complete, and during that time he was also able to form the Josh Williams Band – a group that went on to win the coveted Emerging Artist of the Year award from the IBMA in 2010.

The current Josh Williams Band is:  Josh Williams on guitar and vocals, Jason McKendree on banjo, Nick Keen on mandolin and Randy Barnes on Bass.