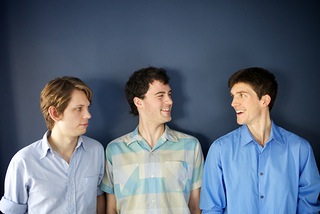 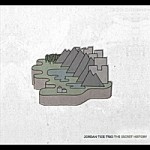 It’s been nearly seven years since I reviewed Jordan Tice’s “No Better Place” album (Patuxent CD-0126). Is the young guitarist still presenting an enjoyable, highly arranged instrumental elixir? Has he further refined his style? Has he become even more seasoned, mature, and exceptional than he was back then as a young high school grad? Or is he now experiencing a seven-year itch and moving on to other things? Happily, I can report that the sonic alchemist still conveys abundant character and individualism in
his original music. His 2005 album included an illustrious cast of guests who were given plenty of opportunities to strut their stuff. I understand that his 2008 “Long Story” album also included an all-star cast.

Now, Jordan Tice Trio’s “The Secret History” project paints its musical canvas with only Tice’s guitar, Simon Chrisman’s hammered dulcimer, and Paul Kowert’s upright bass. All three new acoustic pioneers display technically impressive moxie throughout the eight tracks. I hear fewer direct influences from folk, bluegrass, and jazz idioms that Tice explored in his early days as a player with Gary Ferguson and Sally Love, and bluegrass bands like “Foxes on the Run” and “Blue Light Special.” Instead, the trio’s music now takes on a unique personality all its own. “The Secret History” ebbs and flows like the tide, with dynamics that advance and then recede. Will the 5-7 minute tunes be given their fair due with adequate radio airplay? I certainly hope so.

Jordan Tice received a full scholarship to attend Towson State University. A 2009 graduate with a degree in music composition, he now makes his home in Boston. His tone, timing, balance, rhythm and execution are extraordinary. He drives the original music with dynamic pronunciation, and the interplay of Chrisman and Kowert with him is phenomenal. On tunes like “Duet” and “Death and Spiders,” Kowert’s moaning low-end sounds almost ominous, and that may take a little getting used to. You might even adjust the equalization on your playing device. Yet he is always right on the money with his bass notes, whether plucked or bowed. A 2009 graduate of the Curtis Institute of Music, Kowert lives in New York and tours with Punch Brothers (featuring Chris Thile). Simon Chrisman has followed his muse by relocating from the northwest to Boston. Making a name for himself as a distinctive, evocative dulcimer player, he also tours with The Bee Eaters and Jeremy Kittel Band.

Collaboratively, the Jordan Tice Trio members are very well-suited and supportive of each other.  It takes skill to flawlessly execute one’s own unique style while still presenting a tasteful, balanced, coherent, meaningful group sound.  Tice once said the best way to understand bluegrass is just to “listen to it.” Close listening, reflection and study are good advice for this instrumental release, as well.