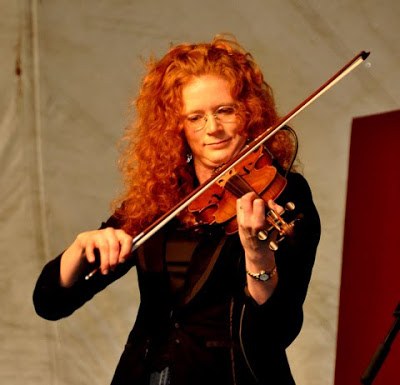 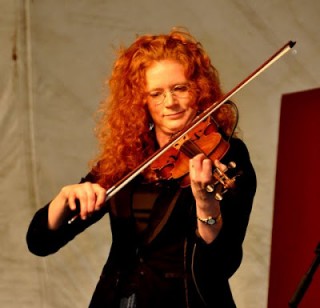 Jim Roe of Roe Entertainment has announced the addition of singer, songwriter and multi-instrumentalist, Becky Buller to his roster of award-winning artists.

Originally from St. James, Minnesota, Becky Buller has appeared the world over performing Bluegrass, Americana and Roots music to the delight of her many fans. Considered by many to be one of the premier songwriters of the last decade, Buller’s compositions have been recorded by Ricky Skaggs (“Music To My Ears”), Rhonda Vincent (“Fishers of Men“), Doyle Lawson & Quicksilver (“Be Living“), Josh Williams (“You Love Me Today“), and Russell Moore & IIIrd Tyme Out (“My Angeline” and “Rest My Weary Feet.“). She also wrote the title cut of Special Consensus’ Grammy-nominated album, “Scratch Gravel Road”.

In addition to being a hit songwriter, Buller is an accomplished singer and musician, moving flawlessly from fiddle to claw-hammer banjo to guitar. She was featured on the Spring 2012 cover of Fiddler magazine, won the 2006 International Bluegrass Music Association’s (IBMA) Album of the Year award for her work with the Daughters of Bluegrass, and was the 2001 winner of MerleFest’s Chris Austin Songwriting Contest. She is currently in the studio finishing up her third solo album, ‘Tween Earth And Sky, which will be released on Dark Shadow Records in Fall of 2014 and is a 2014 nominee for IBMA’s Songwriter Of Year. In her spare time, Buller co-hosts Thunder Radio’s Bluegrass Crossroads Show on WMSR in Manchester, Tennessee, teaches instrumental music, and has been a member of the IBMA board since January of 2014.

After performing 10 years along side Valerie Smith & Liberty Pike and 2 years with Darin & Brooke Aldridge, Buller is ready to bring her stylistic and original music front and center with her own band. “I remember seeing Becky perform a handful of years ago and wondered at that time why she wasn’t fronting her own band,” says Jim Roe of Roe Entertainment. “As soon as I heard news of her plans, I searched hard for her phone number. Long story short, I am very excited to add her exceptional, all-around talent to a roster of artists that I am very proud to be working with.” “I’m looking forward to working with Jim,” says Buller. “He’s seems to really have a passion for this music. His roster is stacked with a talented bunch of folks and I’m excited to be numbered amongst them.”

Becky Buller will be represented exclusively by Jim Roe of Roe Entertainment and is currently accepting offers for 2015 and beyond. To book Becky Buller at your event, please visit www.RoeEntertainment.com. To learn more about Becky Buller, visit www.beckybuller.com.

Roe Entertainment is a full-time booking agency representing some of the best known award-winning and talented all-acoustic bands performing today. The agency was established in 2005 by owner Jim Roe and specializes in contemporary and traditional bluegrass bands, Americana and singer songwriters, all of which tour coast to coast, including Canada and overseas.

Jim Roe has been a successful, independent agent for nine years but has been in the music business since 1981 working for two large music retail corporations, MCA Nashville and Skaggs Family Records before starting Roe Entertainment. Jim also served on the International Bluegrass Music Association’s Board of Directors for Managers, Agents and Publicists from 2009-2012.