Jim Hurst – Back To The One

Jim Hurst just unveiled his new Pinecastle Records single, Back To The One.

No stranger to success, Hurst has been honoured by the Bluegrass industry on multiple occasions, including taking home the coveted Guitar Player of the Year award multiple times from the International Bluegrass Music Association (IBMA).
The new release is the lead single from the upcoming full-length album From The Ground Up, coming in 2022.

Fans can download and stream Back To The One here.

As I often do, I came up with this melody while driving and hearing a traditional type Bluegrass song in the making. I turned on my voice recorder and hummed the song to keep the idea from disappearing. The title of the song and the idea of the song came about while telling myself which chords went where while humming. Back To The One is a phrase I used, then it developed into the story – man feels sad that he didn’t treat his wife the best he could and is wanting to get her back home. Dale Ann Bradley’s harmony vocal was exactly what the stellar musicians’ efforts needed to complete the song for Jack and I – Jim Hurst. 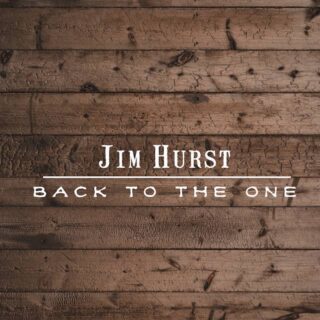 The song was co-written by Jim Hurst and Jack Shannon. The song tells a story about losing love and wanting to do things a different way. It centre’s around the singer’s powerful voice, which delivers a soothing and laid-back tone. Like any love story gone wrong, it touches on an array of emotions, with its captivating lyrics. It’s the follow-up to the feel-good anthem, It’s A Beautiful Day. The stand-alone track would go on to chart for several months on Bluegrass Today’s Weekly Grassicana Airplay Chart.

Hurst has recently signed on to Pinecastle Records, but has had a long career touring and recording with some of the biggest names in Country and Bluegrass music. He decided to embark on his own in 2010 as a solo artist, which hasn’t disappointed. In total, he’s released seven projects. Each displays his diverse and deft guitar work and soothing vocals.

His live performances meet with rave reviews as he astounds his audiences with his brilliant playing yet makes people feel right at home with his humble, congenial and funny persona. Jim is currently performing solo full-time and with his Jim Hurst Trio, both nationally and internationally, as well as teaching at camps and workshops in North America and Europe. Additionally, his highly sought-after talent has led to side projects with other Bluegrass greats such as Claire Lynch, and David Grisman.

Born in Middleboro, Kentucky into a musical family and was raised with a guitar in his hands. Many weekends growing up were spent picking with family and friends. Jim was influenced early in his career by flat-pickers such as Tony Rice and George Shuffler, Doc Watson, Clarence White and others.

To listen to Jim Hurst is to be amazed by his tasteful and flawless performances. Perfect timing and tone and his unusual picking style has enchanted guitar players from the novice to his peers. It’s no surprise, then, that his musical mastery began with a musical upbringing paving the way for a winding and varied career path.

To learn more about Jim Hurst, check out his official website.