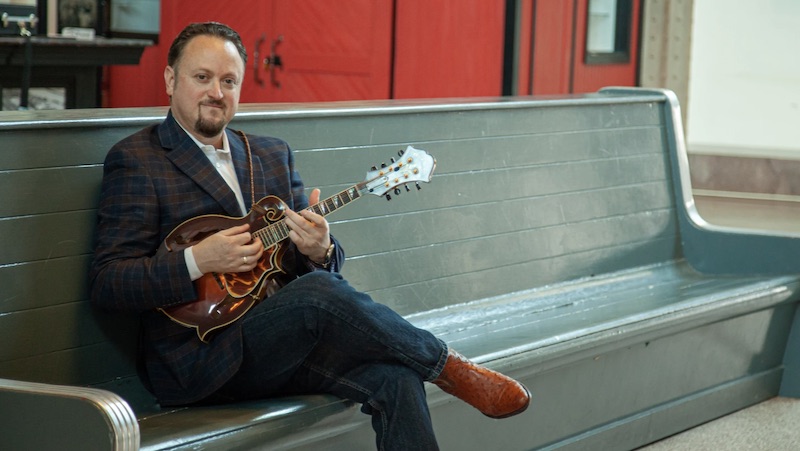 Australians may know of Jesse Brock when he visited Australia with Audie Blaylock and Redline. Here is news of his latest project.

Sound Biscuit Productions has released a solo project single from Jesse Brock, to radio today. Jesse wrote the song, Streamliner, which features him on mandolin as well as guitar and harmony vocals.

Jesse Brock is well known throughout bluegrass music with over 39 years dedicated to his craft. His expertise on mandolin has earned him countless awards and accolades over the years. 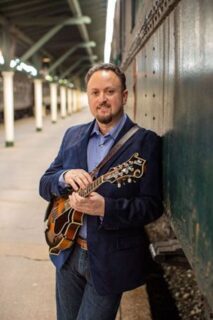 Jesse Brock approached Sound Biscuit Productions with a plan for his next solo album and debut for him as a Sound Biscuit recording artist. Jesse’s vision included some of the most talented musicians in bluegrass today. Each song on the forthcoming album brings something unique and fresh to the listeners ears with many originals, as well as some classic covers.

The Sound Biscuit studio is a musical sanctuary for me. My friendship with Dave Maggard (label & studio owner, engineer & executive producer), has allowed a calmness for creativity to write as well as produce. For example, at the beginning of the first day of recording, I awoke with the words and melody to my single ‘Streamliner’ vividly in my mind. After keeping it to myself on the first session day, I played and sang what I had for Greg Blake. We took it in the next day for tracking, shared thoughts and collectively built the bass, guitar and scratch vocals. Having slept on the thoughts of branding my project, God gave me this song in a brief moment of creativity. I hope listening to Streamliner lifts your spirits while taking you back to another time – Jesse Brock.

Streamliner also includes the talents of:

This project has been an amazing journey in musicianship and talent. From picking songs to arranging and producing, each step has been exciting and creatively rewarding. Having the opportunity to work collectively with this level of talent and being a part of it coming together has been humbling.” ~ Dave Maggard, owner, Sound Biscuit Productions.

Radio programmers can now download the single from AirPlay Direct, with worldwide release date expected November 12th. The album is expected to release in the Spring (USA), and you won’t want to miss out on the additional top shelf talent included from start to finish on this project.

Winner of the 2009 & 2015 International Bluegrass Music Awards (IBMA) Mandolin Performer of the Year, Jesse Brock began his Bluegrass career with his family band at the age of nine. He actually started singing at age 7, taking fiddle lessons at 8 & picked up the mandolin at 9. His first album (1983) was recorded with his family at age 11 and later that year played the Grand Ole’ Opry as the first place prize winnings at Bill Monroe’s Bean Blossom Band Contest. As Bill’s guest on the Early Bird Special, C.W. Brock & the Next of Kin, later to be renamed The C.W. Brock Family played two songs.

Jesse is currently performing with a cast of bluegrass veterans known as Fast Track on EMG Records. In addition to his current position, Jesse is also offering his Streamliner album band for bookings in 2021 and beyond. Jesse has been working diligently in the studio at Sound Biscuit Productions on the above project, Streamliner. Featuring artists Bronwyn Keith-Hynes, Jason Carter, Josh Swift, Rob Ickes, Russ Carson, Ron Block, Greg Blake, Barry Reed and Dale Perry. Jesse is also a solo artist in his own right, with an IBMA award-nominated CD Kickin’ Grass on Pinecastle Records that includes an A-list of pickers and was co-produced with his former band mate, Ron Stewart. In 2007,

Jesse has been privileged to play all over the world, making his first trip to Europe in 1997, and returning several times since, including a trip to Bulgaria to record with Lilly Drumeva. Brock has since recorded in Spain as well. Jesse has worked with: The Lynn Morris Band (2 albums), Dale Ann Bradley (2 albums), Michael Cleveland & Flamekeeper (4 albums), Audie Blaylock & Redline (2 albums) and most recently with The Gibson Bros.

Jesse first appeared on the Grand Ole Opry at the young age of 11, and since has performed on stage with Ricky Skaggs, George Jones, Willie Nelson, Alison Krauss, The Tony Rice Unit, and the list goes on. In recent years, Jesse was an integral part of Michael Cleveland & Flamekeeper, recording two band albums awarded IBMA’s Instrumental Album of the Year (2009 & 2011), and the band winning Instrumental Group of the Year four years in a row (2007-2010). Brock was also on Michael’s 2 Rounder solo projects in the early-mid 2000’s: Flamekeeper and Let ‘Er Go, Boys.