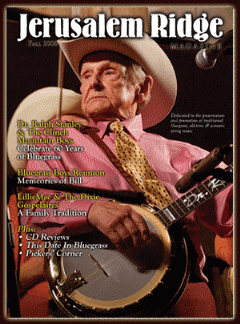 The publisher’s website reveals plans to publish the magazine quarterly, and each issue will spotlight in-depth stories, interviews, information and regular features about about the creators, performers, fans and supporters of traditional bluegrass and old-time acoustic string music in the true spirit of those music legends that helped to shape this truly American art form.

The website aims to provide a view to the contents of the current issue of Jerusalem Ridge Magazine, as well as condensed, preview versions of the stories, articles and regular features.

Traditional bluegrass fans may recognize the title Jerusalem Ridge as one of Bill Monroe’s most famous and haunting instrumental tunes written as a tribute to the Monroe family farm where Bill grew up and learned his musical roots from his friends and family members, most notably his beloved Uncle Pen VanDiver.

Bill, along with brothers Charlie and Birch, developed a distinctive vocal and musical style, blending old world Scottish-Celtic folk tunes with blues/spiritual/mountain music prevalent in the region. They spent many hours picking & singing on the porch of their family cabin, later to be immortalized in one of Bill Monroe’s signature tunes, I’m Goin’ Back To The Old Home,and which to this day is one of his most famous and often played songs.

The premiere issue is scheduled for release at this year’s Jerusalem Ridge Bluegrass Celebration in Rosine, Kentucky, October 2-5, 2008. After that it will be distributed at a festival, event or music retailer near you. But even if you can’t attend this year’s festival you can still be sure to get your very own copy of JRM by subscribing from their website