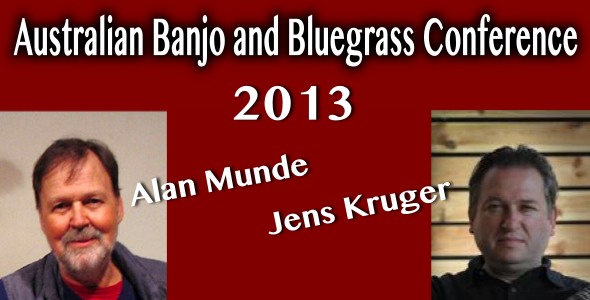 This week there was a major announcement from Peter Nahuysen, the convenor of the Australian Banjo Conference. His special guest instructors for the 2013 December conference will be none other than banjo greats Jens Kruger and Alan Munde from the USA.

Jens Kruger, (of The Kruger Brothers fame) and Alan Munde, (one of Jimmy Martin’s best banjo players, The Flying Burrito Brothers and Country Gazette) are two of the finest banjo players of all time  and have influenced generations of banjo players with their flawless technique and ground breaking music. For both, this will be their first time to Australia and their appearance at the Banjo and Bluegrass Conference at Maleny will mark a milestone in the quality of instruction and performance ever to be presented.

A little about Alan Munde:

Alan, whose nick name was “Mr Clean”, has been a major inspiration to many players who started their banjo picking journey in the 70’s and 80’s. We were blown away by his clean, crisp and consummate picking, particularly as displayed on his seminal “Banjo Sandwich” album. Born in Oklahoma, Alan Munde first learned banjo from banjo player, Ed Shelton. He frequently played amateur gigs around the state and met fiddle player Byron Berline whilst at University. With Byron Berline, he went on to form “The Stone Mountain Boys” in 1965, after which Alan moved to Kentucky in January 1969 to play with Wayne Stewart and Sam Bush in a group called Poor Richard’s Almanac.

Not long after they released an instrumental album on Ridge Runner Records, called Poor Richard’s Almanac, which featured many of their standout tunes. Munde joined the legendary bluegrass musician and self-proclaimed king of bluegrass, Jimmy Martin in 1969. He played with Martin as one of the Sunny Mountain Boys from October 1969 to October 1971, and in the meantime earned his living by working as a school teacher in Nashville.

In 1972, Alan became a member of the legendary Flying Burrito Brothers, performing with Byron Berline. After a European tour, the Burritos split up and Munde joined Country Gazette, then consisting of Roger Bush on bass, Kenny Wertz on guitar, and on the fiddle, Bryon Berline, who had formed Country Gazette earlier in the year. Country Gazette went on to record their first album “Traitor In Our Midst” in 1972. For the next twenty years Alan remained a central figure in the Country Gazette, playing with notable musicians such as  Roland White, Clarence White, Joe Carr and Gene Wooten.

In 1977, Alan Munde and mandolinist Sam Bush recorded “Together Again for the First Time” with Roland White, Curtis Burch and John Cowan both members of legendary New Grass Revival with Sam Bush.

Alan currently serves on the Board of Directors of the IBMA He taught full-time in the Bluegrass and Country Music Program at South Plains Georgia from 1986 to May 2007. Munde also wrote and hosted a monthly 5 string Banjo column for Frets Magazine during the 1980s

Jens Kruger (and the Kruger Brothers)

At age six, when Jens (Yens) heard the banjo on one of his dad’s American records, he yearned to play it. But having no access to one, Jens played their mother’s accordion, accompanying his brother Uwe, who played their father’s guitar. When Jens turned ten he acquired a tenor banjo and started to play Dixieland jazz, hoping that one-day ‘Foggy Mountain Breakdown’ would somehow flow from the instrument. A year later, Jens and Uwe made their first public appearance, and two years later Uwe bought Jens his first five-string banjo.

At age 16, Jens and Uwe left home and traveled throughout Europe calling themselves the Rocky Road Band, attempting a living as street musicians. Their adventure paid off in the form of a record contract with CBS. In 1982, at the age of 20, Jens crossed the Atlantic, heading for the Bean Blossom Festival and Bill Monroe. Monroe introduced Jens to the Grand Ole Opry, as the first known European banjo player. After living with Bill for the summer and following his advice, Jens returned to Switzerland to develop his own musical style and repertoire. For four years, Jens spent days and nights learning tunes from all the records he could find.

In 1986, Jens and Uwe reunited to form the Appalachian Barn Orchestra, the forerunner of today’s Kruger Brothers. Since MerleFest 1997, the event that launched the Kruger Brothers’ career in America, Jens has performed with Earl Scruggs, Doc Watson, John McEwen, Willie Nelson, and Ricky Skaggs, to name only a few. Like Uwe, Jens can play many stringed instruments with proficiency, and like the Kruger Brothers, Jens’ style and virtuosity cannot be characterised with a word or phrase. But those who have heard Jens play banjo know that he is truly a master of his art. As a composer, Jens’ comprehension of music in all of its forms is becoming well-known among his peers, colleagues, and the Kruger Brothers’ growing audience.