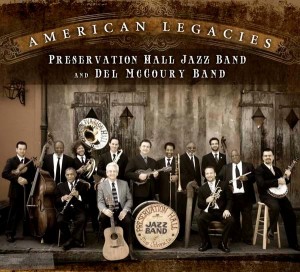 Television viewers in the USA got the chance to witness the collaboration of two of America’s music greats on The Late Show with David Letterman this week. The video below showcases the merging of bluegrass greats the Del McCoury Band and the Preservation Hall Jazz Band of New Orleans performing I’ll Fly Away.

Their appearance on Letterman was to promote the project American Legacies album on April 12th via McCoury Music and Preservation Hall Recordings.  Inspired by the success of the Del McCoury’s participation on 2010’s Preservation a PHJB project made with multiple artists to benefit New Orleans’ unique Preservation Hall venue and its Music Outreach Program, the set offers a dozen songs filled with deep respect and joyful virtuosity.

Prior to the release of the album, the two groups announced a joint tour that will feature them performing on their own and together in a groundbreaking concert experience.