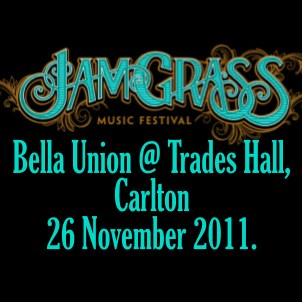 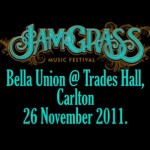 Last month we brought news of another festival on the horizon. Jambands Australia has now announced some of the program offerings for the inaugural JamGrass Music Festival to be held at the Bella Union @ Trades Hall, Carlton on 26 November 2011.

The JamGrass Music Festival has announced a lineup of bands, each of which approach bluegrass from a different perspective. The evening will end with the JamGrass Superjam, a collaborative performance highlighting musicians from throughout the evening.

Inspiration for the JamGrass Music Festival (JMF) was found when the newly formed Jambands Australia began video documenting a variety of up and coming bands throughout Melbourne. It quickly became clear that there were a number of emerging progressive bluegrass bands that were seeking to find an Australian audience for a musical style that originates from the Appalachia region of the United States.

JMF seeks to bridge the gap between traditional bluegrass scene and the wider music audience
in Australia who are often unaware of the raw power of the genre. There’s a growing following of progressive bluegrass or ‘newgrass’ bands in the U.S. which are helping to bring bluegrass music to a new generation of music lovers.

The Telluride Bluegrass Festival in Colorado is a perfect example of an event that continually supports a range of traditional, progressive and bluegrass influenced bands. These bands highlight the bluegrass traditions within a modern context and strengthen the overall awareness and appreciation for bluegrass music.

Recent reports from the Hardly Strictly Bluegrass festival San Francisco have indicated crowds of over 600,000 who have shown up to see many of the country’s leading bluegrass musicians perform along side Broken Social Scene, Robert Plant and Gomez.

From a similar perspective, the JamGrass Music Festival is not strictly about bluegrass, but it seeks to draw on a range of musical styles and influences that will help promote bluegrass music to a new audience. There will be lots of bluegrass classics, but the JamGrass stage will be one that supports musicians to experiment, collaborate and push musical boundaries.

Jambands Australia has partnered with Melbourne Music Week to help bring this event to the wider Melbourne music audience and hope this will generate new fans while encouraging more Australian artists to explore this genre in one form or another.

Support from the bluegrass community has been tremendous and there is an excitement among the bands that is sure to translate into an incredible night of music – Jason Taylor from Jambands Australia.

About the Jambands Australia

Melbourne Music Week (MMW) was established in 2010 by the City of Melbourne to celebrate and support Melbourne’s thriving independent music scene. Returning in 2011 with a refined artistic direction and a strengthened approach to supporting the industry, the second annual MMW is partnering with Melbourne’s music industry heavyweights to showcase some of the best emerging and established local and international talent on offer.