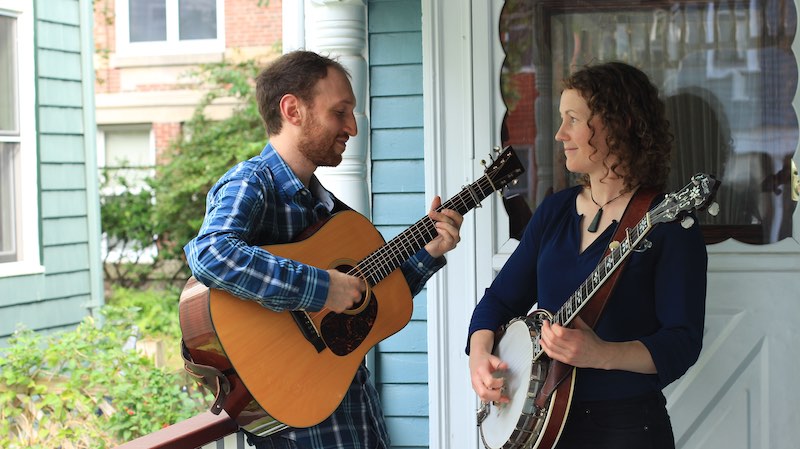 New Zealand’s own Catherine “BB” Bowness of multi-award winning band Mile Twelve and her partner Alex Rubin are returning to New Zealand on the 18th of January. As soon as they get out of quarantine, they will be appearing at Kiwkgrass. BB and Alex will be playing both as a duo and supported by the best bluegrass musicians of New Zealand.

Born in the small town of Marton, New Zealand, Catherine “BB” Bowness spent her early years working and living in her family’s Fish-and-Chip shop. Although an unlikely origin for a bluegrass banjo player, New Zealand would offer BB her first introduction to the banjo, sparking a lifelong love and fascination. Inspired by her New Zealand predecessors, The Hamilton County Bluegrass Band, BB was always drawn to the five-piece full band, and after heading to America in 2012 she co-founded her current group, Mile Twelve, winners of the IBMA 2020 New Artists of the Year Award. Currently, BB lives in Cambridge, Massachusetts, USA

Alex Rubin has been a member of the April Verch Band since 2016. He has toured extensively both at home and internationally, including performances in 49 states and a number of countries including Canada, Sweden, Finland, Germany, Estonia, Australia and New Zealand. Alex’s musical interests as a youth were,eclectic but he ultimately developed a love for acoustic and traditional music while attending Cornell University in Ithaca, NY. Graduating with a degree in Neurobiology in 2011, Alex returned to the vibrant Boston music scene, studying privately with Berklee School of Music’s ineffable John McGann.

Tickets for 2021 Kiwigrass are now on sale here.

Kiwigrass is the home of New Zealand’s Bluegrass, where all purveyors and lovers of bluegrass assemble once a year to share their mutual love of the music born in the hills of Kentucky, and now spread all around the world. Musicians from all over New Zealand, and from overseas come with banjos, guitars, mandolins, fiddles, dobros and double bass to jam together, learn from one another, and enjoy each other’s company for a full weekend of Bluegrass. From Bill Monroe to Billy Strings, the traditional and the contemporary, all is celebrated at this family-friendly, relaxed annual festival located on the banks of Lake Karāpiro at the Mighty River Domain.