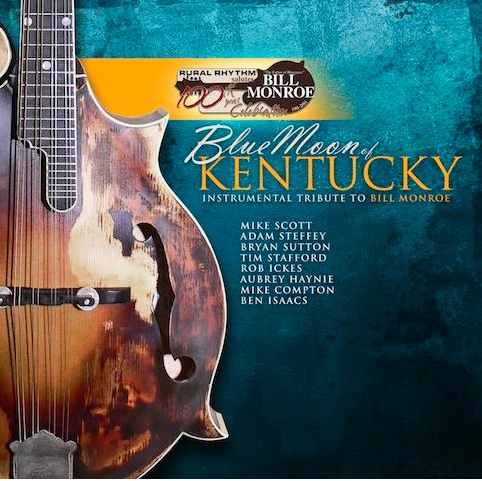 Award-Winning Musicians Come Together to Honor the Father of Bluegrass

People from all over the world will be honoring Bill Monroe this year by celebrating the 100th anniversary of his birth. Rural Rhythm Records has announced the first of their numerous project releases honoring The Father of Bluegrass music.

I am honored to have produced and performed on this 100th Anniversary Tribute project to Bill Monroe, the Father of Bluegrass.  At the onset, it was my goal to capture a bluegrass sound that Bill would be proud of; a sound that runs deep in heritage and is true to tradition.  With hand selected music greats such as Brian Sutton, Aubrey Haynie, Adam Steffey, Tim Stafford, Mike Compton, Ben Isaacs, and Rob Ickes, it wasn’t difficult.  The sessions were more than fun as tunes were laid down with great excellence and seemingly little effort.  In a sense, we are all Bluegrass Boys.  Bill mentored us well –  Mike Scott.

The album cover includes the image of a replica Monroe Mandolin that was made for acclaimed singer-songwriter, Mark Newton by Wade Instruments of Osaka, Japan.

Blue Moon Of Kentucky –  Instrumental Tribute to Bill Monroe (Father of Bluegrass) will be serviced to bluegrass radio and available on AirplayDirect.com next week.