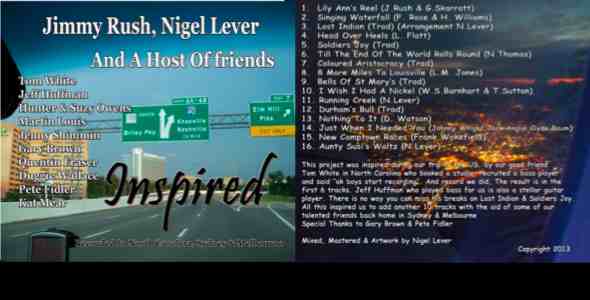 Jim and Nigel were inspired during a recent trip to the USA. On that trip in 2011 their mutual friend Tom White from North Carolina booked a studio, recruited a bass player and said “ok boys start recording”, and record they did.

The results of that session delivered the  first 6 tracks for the CD. Jeff Huffman who played bass for the project is also a stellar guitar player. You can heare his stunning contribution in the breaks to Lost Indian & Soldiers Joy.

With this inspiration the duo returned home to continue to add another 10 tracks to  on the project and enlisted a group of talented friends back in Sydney & Melbourne.

Artists appearing on Inspired include:

The reviews have been surprisingly good to date:

This album is now available from our online shop.