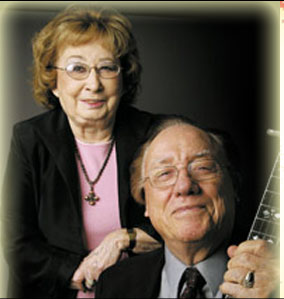 The bluegrass industry’s highest honors of the year go to the new members of the International Bluegrass Music Hall of Fame. This year’s inductees are singer/songwriter, banjo and fiddle stylist John Hartford and the pioneering business manager of Flatt & Scruggs, The Earl Scruggs Revue and Earl Scruggs Family & Friends, Louise Scruggs. Hartford passed away in 2001, and we lost Mrs. Scruggs in 2006.

John Hartford was an American original, a musician, songwriter, steamboat pilot, author, artist, disc jockey, calligrapher, dancer, folklorist, father and historian. Born John Cowan Harford in New York on December 30, 1937, John grew up in St. Louis.  A descendant of Patrick Henry and cousin of Tennessee Williams, John’s grandfather was a founder of the Missouri Bar Association and his father was a prominent doctor. At an early age John fell in love with two things: music and the Mississippi River, and these two passions would last a lifetime.

Born on the 17th February, 1927 in Grant, Tennessee east of Nashville, Anne Louise Certain married Earl Scruggs on 18th April 1948, around the time Flatt and Scruggs resigned their employment with Bill Monroe and formed their own group. By 1955 Mrs. Scruggs had taken over booking Flatt & Scruggs’ Foggy Mountain Boys, and their sponsorship by Martha White Mills of Nashville, begun in June 1953 on radio and on personal appearances, was followed two years later by a heavy schedule of weekly television shows on stations in throughout the Southeast.

IBMA officials state that if the title first lady of country & bluegrass music business could be attributed to anyone, it would most certainly belong to Louise Scruggs. Over a span of 58 years she led her husband’s career down a path to superstardom, as she managed, booked and negotiated recording contracts first for Flatt & Scruggs, and later for the Earl Scruggs Revue and Earl Scruggs Family & Friends.