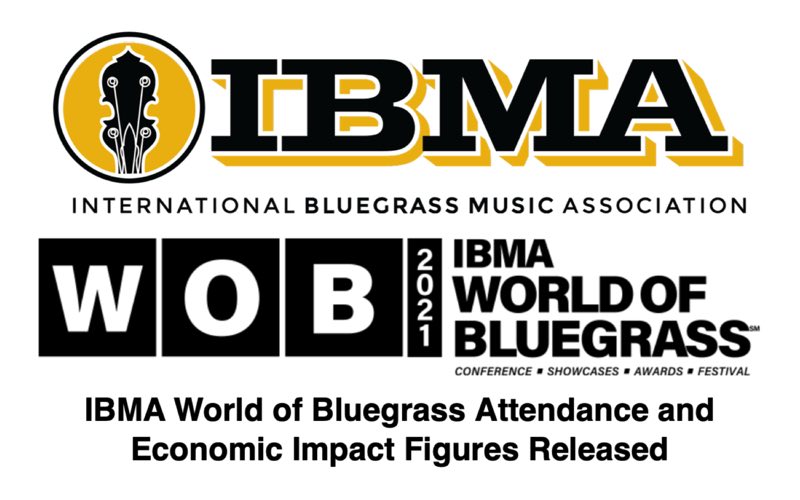 IBMA World of Bluegrass, which includes IBMA Bluegrass Live powered by PNC, saw a combined attendance of 101,368 with the return to an in-person event in Raleigh. This year’s festivities also generated more than $5.7 million in direct economic impact within Wake County according to figures released today by the Greater Raleigh Convention and Visitors Bureau. The events held from 28th Sep. to 2nd Oct. this year included: the three-day IBMA Business Conference, IBMA Bluegrass Ramble, the 32nd Annual IBMA Bluegrass Music Awards sponsored by Yamaha and the two-day festival.

It is important to note that the $5.7 million is a conservative estimate that does not include spending from locals, nor does it include a multiplier of indirect or induced impacts. It represents tourism economic impact only, which is new money coming into the local economy. 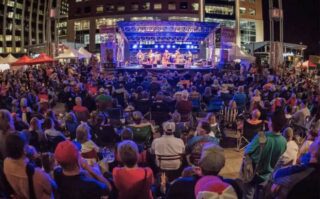 While 2021 attendance was down by nearly half compared to 2019, there was still a strong showing of attendees and vendors praising the return of an in-person event. Last year’s IBMA World of Bluegrass took place virtually due to health concerns related to the COVID-19 pandemic. In the interest of health and safety, attendance and participation in all registered and ticketed IBMA World of Bluegrass activities this year required proof of vaccination. All of the artists who performed at the Street Fest were required to show proof of vaccination against COVID-19 as well.

It was vitally important to get back to live bluegrass music, as both musicians and fans were impacted by the events of the last two years. The IBMA was able to accomplish holding a great week long event in a safe environment and we are so grateful for the lead support of PNC Bank and all of our partners in Raleigh who helped make the event possible, and to the fans that returned, again, to make this the best week of bluegrass in the world. It was a tremendous event, and we can’t wait to be back in Raleigh in 2022 – Pat Morris, executive director of the International Bluegrass Music Association (IBMA)

Earlier this summer, the IBMA and Raleigh Local Organizing Committee – made up of the City of Raleigh, Greater Raleigh Convention and Visitors Bureau (Visit Raleigh), PineCone—the Piedmont Council of Traditional Music and the Raleigh Convention Center – announced a three-year extension to keep the event in Raleigh through 2024. Next year’s IBMA World of Bluegrass will take place 27th Sep. to 1st Oct. 2022.

Given all that’s happened over the last two years it was hard to know what to expect from the festival. No matter how you measure it, we are pleased with the 100% increase in attendance over 2020. Virtual was fun—but there’s no comparison to seeing the streets of downtown Raleigh filled with banjos, fiddles and smiling faces. We’re definitely back and are already looking forward to next year – David Brower, PineCone executive director .

IBMA – the International Bluegrass Music Association – is the non-profit music association that connects, educates and empowers bluegrass professionals and enthusiasts, honoring tradition and encouraging innovation in the bluegrass community worldwide. The organization’s 12 year stay in Raleigh (contracted through 2024) is the result of a partnership with Greater Raleigh Convention and Visitors Bureau (Visit Raleigh), the Raleigh Convention Center, PineCone—the Piedmont Council of Traditional Music, the City of Raleigh and a local organizing committee. IBMA.org.

PNC Bank, National Association, is a member of The PNC Financial Services Group, Inc. (NYSE: PNC). PNC is one of the largest diversified financial services institutions in the United States, organized around its customers and communities for strong relationships and local delivery of retail and business banking including a full range of lending products; specialized services for corporations and government entities, including corporate banking, real estate finance and asset-based lending; wealth management and asset management. For information about PNC, visit pnc.com.

About the Greater Raleigh Convention and Visitors Bureau:

As the official destination marketing organization for Wake County, the Greater Raleigh Convention and Visitors Bureau (Visit Raleigh), is responsible for promoting Wake County as an attractive travel destination and enhancing its public image as a dynamic place to live and work. Through the impact of travel, the organization strengthens the economic position of and provide opportunity for people throughout Wake County. Raleigh, N.C./Wake County welcomes nearly 13 million visitors annually whose spending tops $1.7 billion. The visitor economy supports more than 17,000 local jobs in Wake County and generates $186 million in state and local tax revenues, saving each Wake County household $470 in taxes annually. visitRaleigh.com.

PineCone is the Piedmont Council of Traditional Music and exists to bring people together around bluegrass, old-time, gospel and other forms of traditional music. We are one of the Resident Companies at the Duke Energy Center for the Performing Arts in downtown Raleigh and the producer of IBMA Bluegrass Live! powered by PNC, the big bluegrass festival held in downtown Raleigh each fall. This festival is Raleigh’s signature event, generating more than $16 million in direct economic impact since the program moved to Raleigh in 2013.

About the Raleigh Convention Center:

The Raleigh Convention & Performing Arts Complex is home to four pristine venues in Raleigh, North Carolina. Owned and operated by the City of Raleigh, the Raleigh Convention Center, the Duke Energy Center for the Performing Arts, and Red Hat Amphitheater are located within a two-block radius in the heart of Downtown Raleigh and welcome approximately one million visitors annually. Nearby, the City of Raleigh-owned Coastal Credit Union Music Park at Walnut Creek welcomes roughly 300,000 people each season.