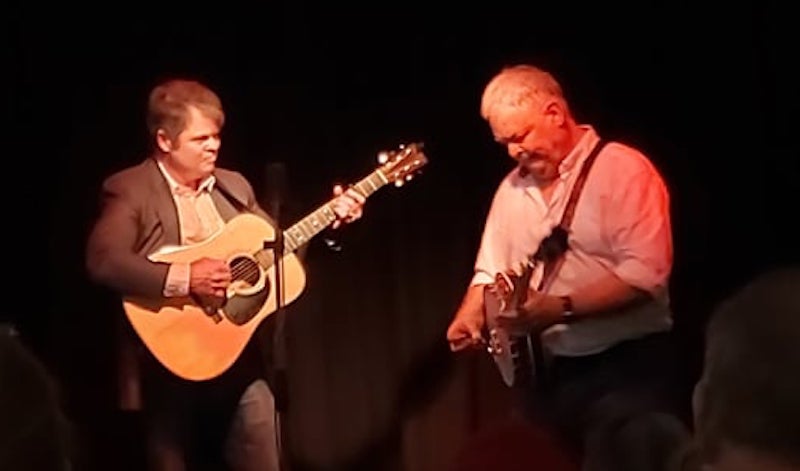 Ian Simpson is well known as one of Australia’s finest banjo players, awesome multi-instrumentalist and sickeningly nice guy. He turned 60 on Sunday and wanted to celebrate by doing what he loves; playing and listening to bluegrass music.

Ian organised “the” bluegrass gig of the year at Clancy’s Fish Pub in the heart of Fremantle. It’s lucky that Clancy’s is a Fish Pub, because we were packed in like sardines. 90 percent of Perth’s bluegrass musicians were playing, while in the audience was 90 percent of the other 10 percent. I had a feeling it was going be a full house, so we went straight to Clancy’s from our regular Sunday morning jam, just in time to snaffle the last available table. 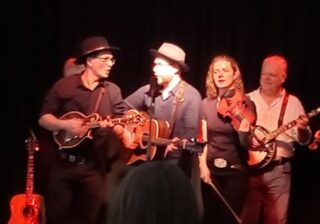 The show started with a recording of Ian playing and singing The Ballad of Jed Clampett, at thirteen years old, having played banjo for just three months. He played it better than I can now. Also entertaining were the looks Ian gave as the thirteen year-old him made a (rare) mistake or sang. “My voice had not broken yet”.

First band up was The Lost Followers, consisting of Ben Tremlett, Dave Woodhouse, Alyssa Nixon-Lloyd, Mark Hochstadt, Fred Bjorksten and Dave Clark. They opened with Simpson’s Hollow as a tribute to the birthday boy, then played their own unique flavour of bluegrass standards as well as Bob Dylan’s Signor and Tom Waits’ Clap Hands. Ian joined them for How Mountain Girls Can Love to finish up the set. 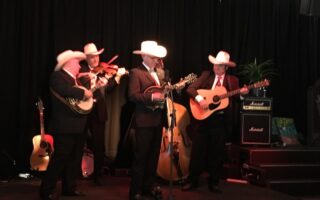 Next cab off the rank was Bluegrass Parkway, consisting of Paul Duff, Maria Duff, Mick O’Neill, Mick Patrick and Wayne Perry. Bluegrass Parkway is the longest continually active bluegrass band in Australia, possibly the world. Ian had played guitar with them for 9 years. “One year short of Superannuation”

They played their wonderful blend of bluegrass and gospel songs and tunes, featuring fine instrumental breaks and exquisite harmonies. Ian joined them (donning his old hat) for half the set. The highlights were the banjo-based (my bias is shining through) duets Country Blues with Ian playing clawhammer style, followed by a cranking version of Cripple Creek, featuring some magnificent twin banjo harmonies. 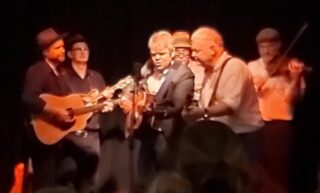 All the bands were using the one microphone set-up, so intervals between bands were pleasantly short. City Slickers, Ian, Wayne Perry, Adam Gare and Peter Harper started with a bluegrass style version of Misty (Wayne is Glen Campbell’s biggest ever fan) and played a quick set, finishing with a fast-paced bluegrassed Rolling On The River, brought to life with Ian’s sublime banjo picking. I’m sure there was smoke coming off those fingers!

Jim Fisher met Ian when he was fifteen and had responded to an advertisement Jim placed in the paper looking for bluegrass musicians. “I can play Foggy Mountain Breakdown as fast as the record”. Ian’s now sixty. You do the maths. Hamilton Hillbillies (Hamilton Hill is a suburb near Fremantle) comprises of Jim and Ian, Adam Gare, with Jim’s son Tom Fisher now on bass. This was their first performance since the loss of “Uncle” Fred Kuhnl. They kicked it off with Your Love is Like a Flower and played a collection of bluegrass and gospel songs from 1948 to 1975 interspersed with stories of exploits in their youth. That’s what you do at a sixtieth. They were joined onstage by Marion Fisher and Bill Rogers and finished with Train 45 specifically chosen to show off Ian’s incredible banjo prowess. 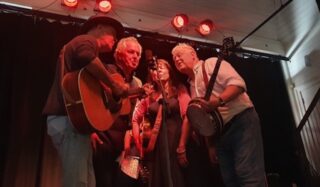 The afternoon concluded with several of the day’s performers jamming a collection of bluegrass standards. Old Home Place, Nine Pound Hammer, Cherokee Shuffle, Before I met You, Will the Circle Be Unbroken and Old Joe Clark. The encore was Rollin’ In My Sweet Baby’s Arms. The whole jam received vocal accompaniment from all the bluegrass lovers musicians in the audience, although it’s hard to sing with a huge smile on your dial. We all had that.