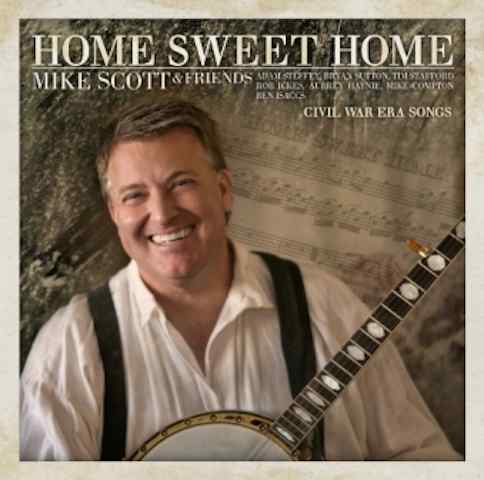 Rural Rhythm Records is saluting the 150th Anniversary of the Civil War (1861-1865) with an instrumental album titled Home Sweet Home, which contains 14 songs that were popular during the Civil War Era.

I am so excited about this Civil War Era project.  My own banjo heritage traces back to both of my grandfathers.  Also, my great-grandmother “Verdie” on my dad’s side played banjo and was born during the 1860’s Civil War period.  I never had the opportunity to meet any of them, but I am proud to carry on the banjo legacy in our family . I dedicate this project to those who broke through the pages of our nation’s history and paved the way for a better America.  I hope these tunes will touch you and give you a reminder of a period of time captivated as part of our nation’s journey to unity and freedom.  May it bring you joy, put a smile on your face and put some ‘giddy-up’ in your step – Mike Scott.

The songs on Home Sweet Home could be heard during the 1860’s in America’s major cities, small towns, rural areas and soldier encampments during the Civil War.  150 Years later, these American musical treasures can be enjoyed again on this special collection.  These songs should not be lost and forgotten, but passed down to future generations as a part of America’s musical heritage.

Mike Scott is seen by millions of TV viewers each week during prime-time on RFD-TV, (72 million households), performing with Ronnie Reno & Reno Tradition on the Reno’s Old Time Music Show.  He also is the host of the new music TV series Behind The Dream airing on BlueHighways TV.

Pre-sales for Home Sweet Home are now available on Amazon, iTunes, and Mikescottmusic.com.