Howard Miller advises me that he has contacted Phil Parnel whose radio show HillBilly Heaven is now in its tenth year: –

The show is now being continued by Big Al, a well known local radio presenter and it is a popular South Coast radio program. Good to see something survive years after one starts it up.

Here is a photo (right) of the Hill Billy Heaven team with Dean Sapp from Cheasapeake, Maryland, USA on his visit in 1998. With L to R, Big Al, Dean Sapp, Howard Miller and Phill Parnell at 2UUU Radio Station Nowra, NSW. Dean put on a fund raising night at a local club, donated the proceeds and put a fair bit of money into this community radio station. We all look younger somehow ? 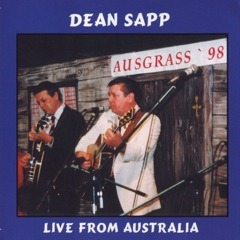 Perhaps another mention of the era including the outcome of Dean Sapp’s visit to Australia is needed, which saw the first release of an impromptu Australian Bluegrass Band in the USA, known in the back room as The Fitzroy Express, Tim Lee on banjo, Bruce Packard on double bass, Nick Dear on fiddle, Tony Hunter on mandolin and vocals and Gary Brown on dobro. This band was featured on a two CD release, titled, Live in Australia on Old Train Records and sold at festivals across the USA and is still available today, if you can track Dean Sapp down at the many events he performs each year across the eastern states.

I had a box of copies which quickly sold out, I never bothered to restock, too busy doing something else? Tony Hunter was the sound engineer and Phil Parnel recorded the tracks for the CD. Just a little praise for some unsung heroes.

Dean Sapp is very keen to revisit Australia with his new band members and he would be very suitable for an event like Harrietville, so if you would like one of the finest singer/songwriters of today in Bluegrass Music visit Australia again, push the barrow for Dean and the band, perhaps next year.

Dean is back on 5 string banjo and cooking up a storm, with red hot runs on his own tunes. I really miss him, he was like a brother to me.
Submitted by Howard Miller – NSW