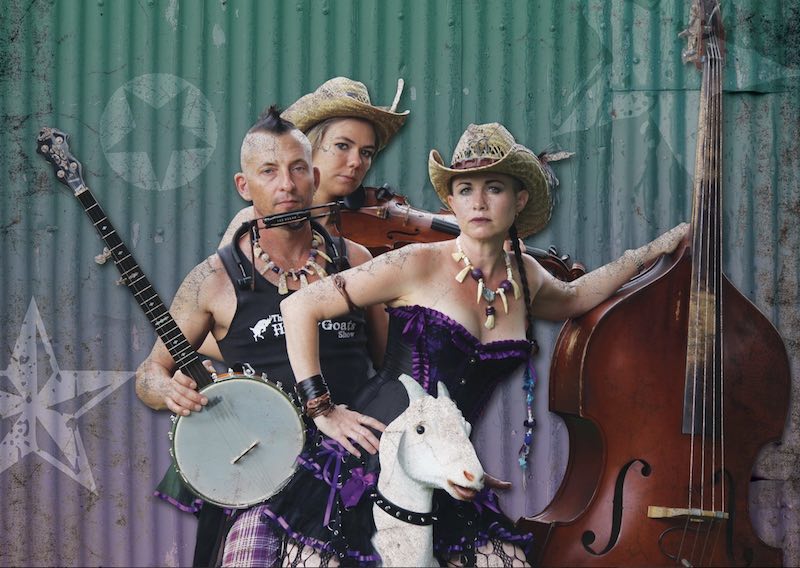 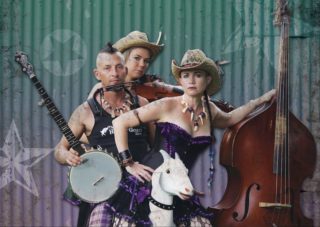 Festival favourites, the Hillbilly Goats are out on tour taking in a variety of venues and festivals along the east coast and a trip across to WA.

It is said that The Hillbilly Goats exude an undeniable passion for mountain music, the instruments and the harmonies. Their mission is to strip back the layers of modern music and transport you on a journey that began centuries ago when the immigrants first settled in the Appalachian Mountains of America. These guys aren’t just a band – they’re a show.

Their recordings paint a picture of traditional songs from 1710 through to the 1940’s with a high energy quirky edge. Featuring Banjo, Bones, Double Bass, Fiddle, Tap Dancing, 3 part Harmonies and more, there is a tale told of the history of Mountain Music’s evolution into Blues, Country & Bluegrass.

2018 saw the Goats touring the launch of their latest album, Old Jack’s Bones after its’ successful release to sellout crowds at the Tamworth Country Music Festival. Travelling across the ditch to New Zealand twice in 4 weeks is only the tip of the iceberg when it comes to touring the new record that “…overflows with the knees up inducing music its followers have come to expect.” (Tony Hillier, The Australian 2018) “… the sheer exuberance, plus the panache and proficiency of the ensemble playing and singing” are key elements to the instant success of this album amongst fans and radio presenters alike. This album reached #3 in the Australian Independent Charts, #21 in the ARIA Country Charts, received a Golden Guitar nomination and was shortlisted in the Qld Music Awards 2019.

These guys aren’t just a band – they’re a show.

Their 3rd studio album, Down Foggy Mountain, recorded & produced by Nash Chambers (Paul Kelly, Jimmy Barnes, Archie Roach, Kasey Chambers), reached immense success with 2 CMAA Nominations. Rabbit in a Log was nominated for Bluegrass Song of the year 2016, and their second single, Cumberland Gap was nominated in the same category for the 2017 Golden Guitars. This album further stamps the musical twist on traditional songs The Hillbilly Goats are famous for with big harmonies and a heavy presence of hard fiddle and fast harmonica.

Their previous album reviews in the Weekend Australian and several music magazines not only rave about their recordings, but their stage presence has been labelled “more driving and energetic than the less traditional shows seen on main stages of Australian country festivals.” (Alex Turnbull, Capital News). The band members are never satisfied with their own instruments and continually swap over and change positions on stage – you won’t know where to look or who to watch!

A dedicated fan base has seen them voted into first place 3 years running for the Cairns Timeout Awards as best NQ band 2012-14, as well as finalists in the Tamworth People’s Choice Awards 2014. Another competition landed them on the main stage at the Official Opening Concert for the Tamworth Country Music Festival, which was an awesome way to kick-start 2015 – Year of the Goat.

Whether it’s a sit down dinner show or a flat out festival set, the Hillbilly Goats are renowned for their entertainment value. Combining song with stories of Mountain Music’s history has proved a marketable success that sees their show advancing through the festival ranks.

So, if you’re still a Goat Virgin and haven’t seen the Hillbilly Goats yet, check them out and see what all the fuss is about. They sure know how to Raise A Ruckus and you are guaranteed to be entertained – Old Time Style.

Who Are The Goats

Goat Boy taught himself harmonica and mandolin at the age of 20. Soon after, he put down his chef tools and ran away with a country band called Bettathannachookraffle. Aboard a rusted out Kombi, the trio toured the country giving Goat Boy a taste of musical freedom and adventure.

Picking up a love for Bluegrass along the way he vowed one day to start a bluegrass/mountain music band. 17 years later, after working solidly to lay foundations in life, he was ready to chase dreams and the Hillbilly Goats were born.

As well as lead and backup vocals, the band keep Goat Boy’s self-claimed ADHD under control by giving him the onstage job of playing three instruments at a time – drums with his feet, a harp in his mouth and strings in his hands (mandolin, banjo, banjitar, guitar and resonator).

Piano tuition and eisteddfods from the age of 6 sure helped when Goat Girl decided to teach herself the double bass in her twenties. With her own passion for Bluegrass and a yearning to drive the bull fiddle she teamed up with husband Goat Boy to create the Hillbilly Goats. Singing was not as natural as finger coordination however 600 shows soon got those vocals and harmonies in line.

Off-stage you’ll find her chained to the desk managing the band bookings, applying for festivals, researching mountain music, networking and juggling finances. Prior to the band, Goat Boy & Goat Girl, a dynamic business team, owned and operated their own import company. These business skills transferred over to the band assisting greatly in behind the scenes management, logistics and production.

With violin as her main instrument and passion, the Goat Buster is very experienced on vocals and with Suzuki training, achieved Grade 8 standard on the Violin and Piano at the age of 16.

Her late teens saw her touring Europe on electric violin for 5 months playing big shows and since then she’s toured Europe and Australia many times with multiple bands playing at festivals such as Glastonbury (UK), World Body Painting Festival (DE), Tribal Elek (FR), Labadoux (BE), Bardentreffen Festival (DE), Splendour in the Grass (AU), Bluesfest (AU) and many more.

A tap dancer from way back – stay tuned as she brings new elements to the Goat’s show with melodica, tap dancing, percussion and more!

Very special guest of the Goats for major festivals and events over the last few years is Caroline Trengove.

With a father who spent most of his working life playing French horn in the Sydney Symphony Orchestra, Caroline has had music in her bones from the very beginning, having learnt the Suzuki method from age ten, exploring the piano and clarinet and eventually finding her way to the violin.
Caroline’s love of improvisation and free-form playing inspired her interest in the exotic and inspired her long journey into the world of Celtic music. This eventually led her to her first major professional stint as violinist in the acclaimed folk trio, Jigzag.

Along with Greg Bryce and Liz Frencham, Caroline toured both nationally and internationally for over a decade and Jigzag became a favourite on the Australian festival scene, and in 2006 were voted Australian Folk Band of the Year. In 2010 the trio decided to take an extended break from touring and this became the perfect opportunity for Caroline to develop her song writing and vocal pursuits.

This period coincided with an opportunity to play violin with Angus and Julia Stone, and in 2010 she accompanied them on their European tour, then afterwards their 2011 Australian Summer Festivals tour, including the Big Day Out. She simultaneously began penning what has now become her 13 track Solo Album, The Time Garden.

Meeting up with the Goats at a festival in 2013 has seen Caroline performing numerous festivals in their lineup and she’ll continue to pop up at future national events.

The Hillbilly Goats are appearing on: