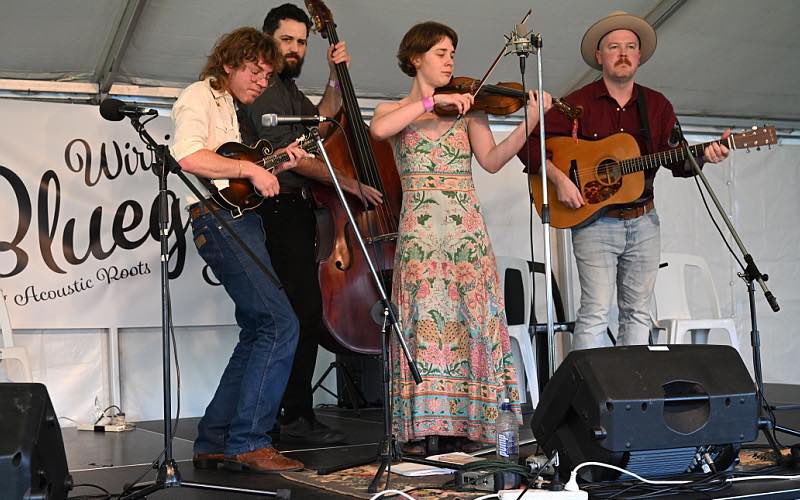 High Street Drifters is an Australian bluegrass quartet spanning the roads between Victoria and South Australia. While the band strive to honour the hard driving sound of original Bluegrass music their youthful flair and unpredictable arrangements show us a more progressive sound.

The group was formed during a time when travelling across the country was not an option, so through countless zoom calls their unresolved passion for the music they shared was all channelled into the birth of High Street Drifters. 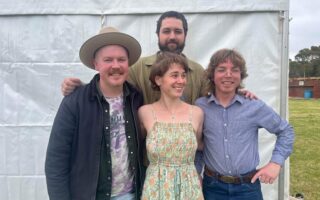 Featuring Justin Vilchez on mandolin, Mae Traeger on fiddle, Daniel Watkins on guitar, and Gage Stead on bass, High Street Drifters shine a new light on many Bluegrass standards influenced by the greats: Bill Monroe, The Stanley Brothers and The Bluegrass Album Band, as well nod to their contemporaries Hawktail, Mile Twelve, The Slocan Ramblers and Michael Daves.

High Street Drifters explore themes that are present in everyday life while entertaining audiences young and old with their tight 3 part harmonies and hot picking guitar, fiddle and mandolin through relatable songs. High Street Drifters are the newest Australian Bluegrass band on the scene debuting at Wirrina Bluegrass festival last November to upstanding applause, The band is primed and ready to take the country by storm… Check some of their Wirrina performance in the video below.

Daniel Watkins:
Guitarist/Mandolinist and Australian Youth Bluegrass Award winner, Daniel Watkins moved from Newcastle to Melbourne to pursue his music career in 2011. Since then he has worked as a touring performer and go-to session musician in the Country/Folk music scene in Australia and the USA. As a member of such varied local acts as One Up Two Down, Buffalo Nickel, The Davidson Brothers, Freya Josephine Hollick, John Flanagan Trio; and Internationally alongside Chris Henry and the Hardcore Grass and Rachel Baiman,

Daniel provides solid vocals and instrumentation with a wealth of knowledge and passion to his various musical projects.

Gage Stead:
Gage (bass) After being bitten by the bluegrass bug in 2011, Gage has found his life completely taken over by the Aus folk scene. Gage considers himself primarily a bassist, but, like many working musicians, he has filled in the gaps by picking most things with strings including banjo, mandolin, cello, and guitar, to name a few. He brings this understanding of the roles of these instruments back to the “engine room” of a bluegrass band, and it shows, or, in his words, doesn’t: “If you can notice bass, it’s doin’ something wrong!” His passion for bluegrass music also shows through in his work as an instrument builder.

He is currently concentrating his efforts on creating classic Martin style acoustic guitars from the 1930s and 1940s.

Mae Traeger:
Mae Traeger is a fairly recent addition to the bluegrass world, yet her fiddle playing and singing has already become recognised by some prominent artists within the scene such as Michael Cleveland, Jason Carter, Justin Moses and Sierra Ferrell. Mae’s love and passion for bluegrass hit her like a wave and it quickly took over her life, with her time being completely dedicated to honing her craft. Mae has worked as a musician for the majority of her life, and started to play in venues around the age of eight, being heavily inspired by her parents who are also musicians.

One of Mae’s aims is to bring bluegrass to a younger audience within Australia and works hard to create a place within the genre for generations to come.

Justin Vilchez:
A versatile and deeply committed bluegrass mandolinist, Melbournian Justin Vilchez got his musical start playing blues and rock ‘n roll guitar at age eight. His passion for melody led him to a bachelor’s degree in jazz and contemporary music before embarking overseas to Saskatchewan, Canada.

Vilchez was promptly recruited into well established Bluegrass band The Local Group (2018-current), recording two albums with the band and touring extensively across western Canada including highlight performances at Blueberry Bluegrass festival and Northern Lights Bluegrass festival. While his talent opens doors to all genres, his youthful and hard driving approach to bluegrass mandolin has impressed die-hard fans and newcomers alike.
Bridging the gap between long-standing tradition and youthful flair, the folk ethic burns strong in Justin.