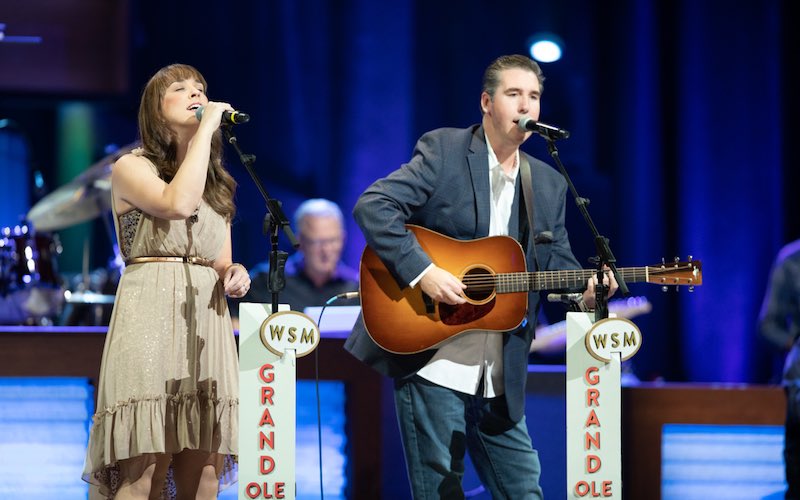 The Billy Blue Records recording duo of Darin and Brooke Aldridge has spent over a decade amassing a fan base, reaping awards, becoming Grand Ole Opry favourites, and releasing a string of well-received albums. Now, the duo is set to release one of their most poignant singles to date, a tribute to their beloved Opry, titled Grand Ole Circle, a track from their critically-acclaimed album, This Life We’re Livin’.

Darin & Brooke have performed on the historic stage more than 35 times since their first invitation in 2017. During covid restrictions, the duo missed performing there on a regular basis, and the idea for the song began to formulate. Grand Ole Circle is a song written by Darin, Brooke, and songwriter Bill Whyte.

Grand Ole Circle was written out of our personal experiences, but also referencing historical performances before our time – Darin Aldridge.

It’s our big thank you to the Opry for always keeping a light on the circle, and giving people hope even in the hardest of times. It’s so very special to play the Opry. It is truly the grandest stage, and we are always honored to be a part of a tradition that we hold incredibly close to our hearts – Brooke Aldridge.

For the recording of “Grand Ole Circle,” Darin and Brooke enlisted the help of a few stellar musicians from The Opry Band, including Kerry Marx, Tommy White, Randy Hart, and Eddie Bayers. Marx commented, “It’s always a pleasure and honor for the Opry Band to play with Darin and Brooke, and playing on this session was really special for us. It’s such a well-written song, of course we love the subject, wonderful musicianship from all the players involved, and stellar vocals from Darin and Brooke! What’s not to love?” Other musicians on the recording include Mark Fain, Bryan Sutton, and Stuart Duncan.

The video for “Grand Ole Circle” premiered this week on Circle TV’s Coffee, Country and Cody,” and Darin and Brooke will be performing the song on the very spot that inspired it at The Grand Ole Opry, this Friday, January 28. The video will be shown to the live audience simultaneously. A portion of the proceeds from the video will be donated to the Opry Trust Fund.

About Darin and Brooke Aldridge:

Armed with the talents of the proverbial triple-threat of uniquely distinctive singing, commanding instrumental skills, and accomplished songwriting, Darin and Brooke continue to ascend to new heights in the industry while maintaining their easy-going, down-to-earth connection with audiences everywhere.

Brooke is a four-time consecutive Female Vocalist of the Year for the International Bluegrass Music Association (IBMA). She was nominated for a fifth time in 2021. Once a six-year member of The Country Gentlemen with the late Charlie Waller, Darin is a former IBMA Mentor of the Year and a gifted singer and multi-instrumentalist. Together with their band – Billy Gee on bass, Samantha Snyder on fiddle, and Jacob Metz on banjo and resonator guitar – Darin and Brooke were recognized with the IBMA’s nomination for 2021 Vocal Group of the Year. They have had multiple nominations over the years from the IBMA, the Society for the Preservation of Bluegrass Music of America (SPBGMA), and the Inspirational Country Music Association. They have enjoyed top spots on the Billboard, SiriusXM, Bluegrass Today, Bluegrass Unlimited, Americana/Roots, and Singing News Gospel charts.