Going to Stay in the Old-Time Way 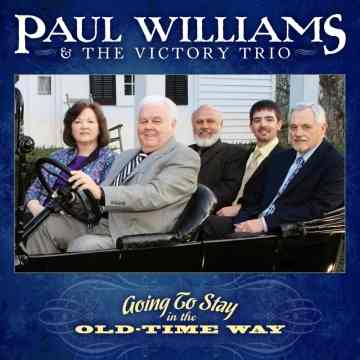 12th Rebel recording Going To Stay in the Old-Time Way Due 31st July. 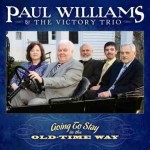 Rebel Records is proud to announce the release of Paul Williams’ twelfth album for the label, Going to Stay in the Old-Time Way, on 31st July 2012.

Paul Williams and his band the Victory Trio are a fixture on the Bluegrass Gospel circuit and have a significant following in the Southern Gospel field as well, and since Paul’s return to the music world in 1999 he has consistently raised the bar high in both genres. His recordings deliver a hard drive, an emotional touch, and passionate vocals. The result is both great Bluegrass and an inspiring statement of faith.

The album features a mixture of inspiring contemporary Bluegrass gospel songs, including three written by Paul himself, along with superb renditions of songs written by such well known writers as Dottie Rambo, Dee Gaskin and Albert Brumley. The song “Help Me Lord” by C.P. Short is featured as another of Paul’s masterful contributions to the tradition of primitive quartet singing. The final song, “What a Time in Heaven,” is reinterpreted from the classic gospel group, the Cooke Duet.

Williams needs no introduction to long-time fans of Bluegrass music. Having started a musical career in the very early days of the genre as a member of the legendary Lonesome Pine Fiddlers, Williams went on to become a key part of Jimmy Martin’s Sunny Mountain Boys, playing mandolin and singing tenor in the best known version of Martin’s band, with J.D. Crowe on banjo.

Known for his powerful and distinctive tenor voice and his mandolin playing, Williams is also noted as a prolific and excellent songwriter, having written a good percentage of Jimmy Martin’s hits, as well as songs that have been recorded by such major artists as Ray Charles, Ernest Tubb, and Hank Williams Jr.

Paul Williams is one of the very few artists to have had two different but highly successful musical careers. One of Bluegrass music’s true pioneers, the native of East Tennessee returned to active touring and recording in 1999, with the first of the dozen records he has recorded for Rebel, the classic Old Ways & Old Paths album.

If Going to Stay in the Old-Time Way is any indication, Paul won’t be slowing down any time soon.