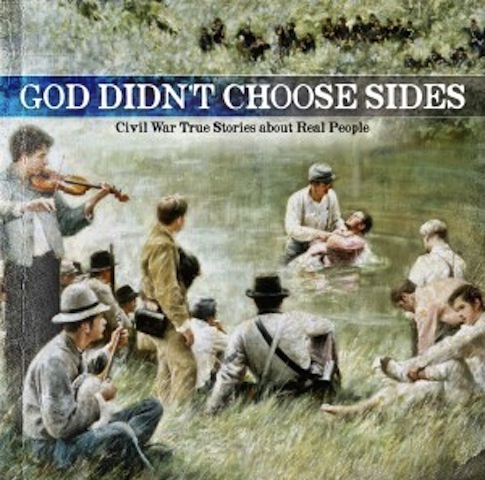 Rural Rhythm Records has announced the release of the music video for the title track of their God Didn’t Choose Sides album.  Released on February 12th of this year, God Didn’t Choose Sides contains Civil War true stores about real people who focus on the common men and women who were thrown together into the realities and horrors of war and displayed amazing acts of kindness, selflessness, faith, love and brotherhood to their fellow Americans.

There have been hundreds of books, movies and songs created about the battles, presidents, generals & heroes as told in our history books about the Civil War. However, rarely do we hear the stories on a personal level of the unsung heroes who gave their lives or had their lives totally turned upside down or adversely changed during the War Between the States which has had such an important impact on our American culture and historical foundation – album project executive producer, Sam Passamano, II.

This is truly an exceptional work about a poignant time in history. The songs and performances on this project paint a vivid and moving picture. It’s an artistic triumph – Kyle Cantrell (Bluegrass Junction, Sirius XM Radio)

…God Didn’t Choose Sides reminds us of what my generation already knew and what future generations need to know – Ronnie Reno, Reno’s Old Time Music, RFD-TV and 2013 IBMA Broadcaster of the Year

Marty Raybon is featured on the title track, written by Mark Brinkman and Paula Breedlove, which tells of an incident following a day long battle when the armies on both sides laid down their weapons to witness a baptism in the river that separated them.

On August 21st the music video was shot on location in Cumberland Gap, Tennessee in the beautiful mountain community of producer, songwriter and featured artist on the album, Steve Gulley. Re-enactors from both the Union and Confederate sides helped bring a movie feel in the telling of this story to the music video.  Re-enactors from the East Tennessee Battery and the 79th New York organizations include; Bill White, Frank White, Jeremy Ray, Jimmy Heltom, Shane Miles, William Dewey Beard, R.L. Kelly and Ernie McStraw

“Since this story is so unique and compelling we wanted to bring the element of a short movie feeling to this music video. We were fortunate to use many of the same Civil War re-enactors from the 1st East Tennessee Battery and the 79th New York organizations that were present for the special God Didn’t Choose Sides concert event at Lincoln Memorial University back on February 22nd,” stated Sammy Passamano, III, music video director.

A companion music video is being edited by Passamano, III and will be available shortly for the song from the album titled “There Is A Fountain”, performed by The Gap Creek Quartet (Dale Ann Bradley, Steve Gulley, Don Gulley and Vic Graves). In the story of the title track, “There Is A Fountain” was the song that was sung by the soldiers during the baptism depicted in the music video “God Didn’t Choose Sides”.

This year marks Raybon’s 40th year as an Entertainer.  Grammy, CMA, ACM Awards with Shenandoah have been a part of Raybon’s celebrated 40 years.  The celebration recently continued when Raybon won his first IBMA award, “Recorded Gospel Song of the Year” for “Beulah Land” during the 24th IBMA Awards Show which took place on September 26th in Raleigh, North Carolina.  This song is off his “Southern Roots & Branches” album released in April 2012. It also contains his first #1 song on the Bluegrass Unlimited chart, “Dirt Road Heartache”, which hit #1 in June this year.