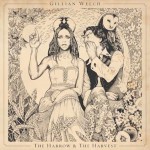 For Gillian Welch fans is has been a long time between drinks. Those waiting for the release of a new CD have been doing so for some 8 years. But as the saying goes, all good things come to those who wait.

It was not until David Rawlings, her partner, released his own, and his first solo album, A Friend of a Friend,  in 2009, that Welch began making headway on the new CD The Harrow & the Harvest.

The release of this album is timed well, coinciding with the 10th anniversary of the Coen Brothers’ movie Oh Brother Where Art Thou? which Gillian Welch featured on the sound track of.

The Harrow & The Harvest was recorded at Gillian’s own Woodland Sound Studios in Nashville, Tennessee, and was produced by David Rawlings.