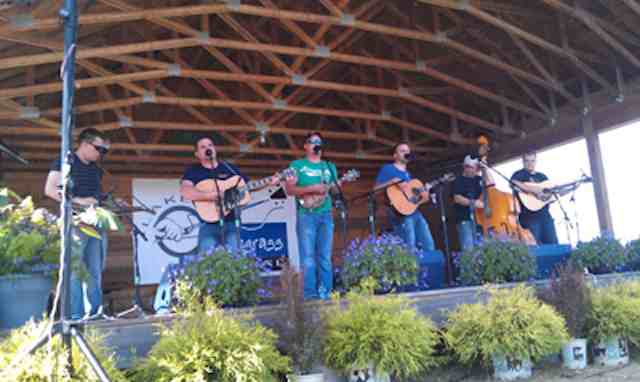 John Lawless of Bluegrass Today, interviewed band member, James Dean this past weekend right after Cumberland River’s performance at the Pickin’ in the Panhandle Festival in West Virginia.  James discusses the band’s involvement with the FX Network’s TV Show, JUSTIFIED including eight of the band’s original songs that have been featured on the last two seasons.  Fans can view the video interview Bluegrass Today.

Cumberland River’s recent high energy live performances have not only garnered the band sold out shows, but also incredible feedback from promoters and fans alike.  The group will hit the stage at the upcoming World Chicken Festival Stage of Stars in London, Kentucky on September 28; the International Bluegrass Music Association’s IBMA FanFest on Saturday, September, 29; the Outer Banks Bluegrass Festival in Manteo, NC, plus the festival’s After Party at the Outer Banks Brewing Station on October 6, and many more.

Growing up in Ewing, VA in beautiful Lee County near the Cumberland Gap National Park, Gary was raised in the heart of the Cumberland Mountains – a hotbed for bluegrass music and great bluegrass musicians.  He began playing mandolin at age 8 and not long after began appearing as a guest on the stages of Kentucky’s world famous Renfro Valley. His talent caught the ears of Rickie Simpkins and Wyatt Rice who helped produce a solo project for the young musician which continued to garner attention for Gary throughout the region. It was around this time that Gary helped to form the popular group, Cumberland Gap Connection and stayed with that band for 6 years – recording three albums.