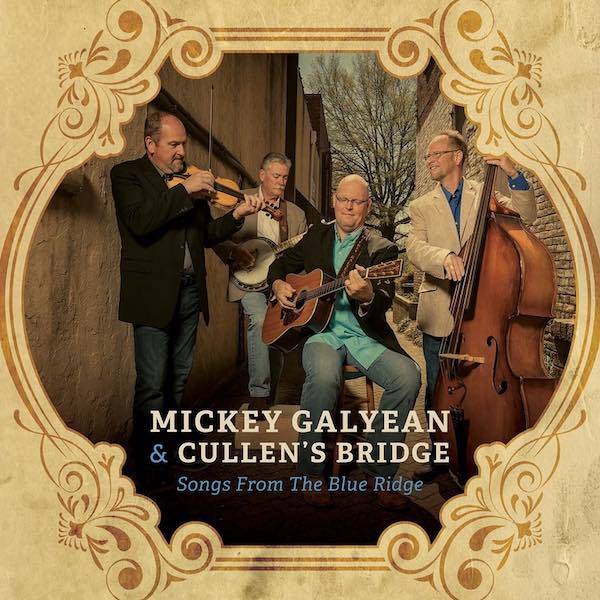 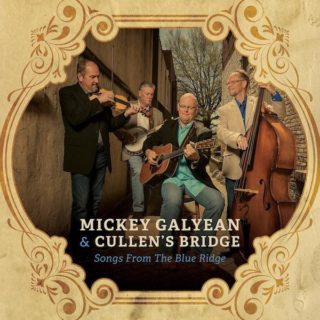 The album has received high-praise from a number of publications including music blog Fervor Coulee, which calls Songs From The Blue Ridge “an intriguing, lasting bluegrass recording.”

Unapologetic bluegrass is what Mickey Galyean & Cullen’s Bridge deliver. Pounding rhythms, searing vocals, strong melodies and just the right mix of deft originals and ripened treasures; that’s the formula that works for this group. Emanating from the bluegrass heartland between Galax, Virginia, and Mt. Airy, North Carolina – Round Peak to “those in the know” – they are bearers of a tradition that has thrived there for generations.

Band leader Mickey Galyean grew up in bluegrass. His late father Cullen (hence the name, Cullen’s Bridge) was a lifelong picker. The band’s name is a perpetual tribute to him as well as a statement on its musical philosophy. Mickey is a strong singer who sports a driving rhythm guitar; he sets the tone for the band. Holding forth on banjo is Rick Pardue, a North Carolinian with a penchant for songwriting; he had the 2012 IBMA Song of the Year and is a past winner of the MerleFest/Chris Austin Songwriting Contest. Bass player Brad Hiatt sets the tempo the band’s performances; his instrument of choice once belonged to famed Flatt & Scruggs picker Cousin Jake Tullock. Billy Hawks adds soulful melodies with his flowing fiddle; he’s logged time with Doyle Lawson and Rebel artists Big Country Bluegrass and Junior Sisk & Ramblers Choice.

The disc is evenly divided between band originals and bluegrass fare. Dixieland For Me first saw the light of day in the middle 1960s on a bluegrass album by George Jones and Melba Montgomery. The Country Gentlemen had recordings of The Convict and the Rose and Wear a Red Rose. Larry Sparks made popular Harold Russell’s These Old Prison Bars nearly 50 years ago. Of more recent vintage is Dudley Connell’s (Seldom Scene/ex-Johnson Mountain Boy) Too Late to Say Goodbye.

The pleading Now I’m Losing You was penned by Mickey, who also offers a thoughtful reworking to a song recorded in the 1960s by the Stanley Brothers, Drunkard’s Dream. Cullen Galyean’s The Blue Ridge Mountains is an autobiographical account of his life in the hills. Pardue takes a strong stand about the purity of his music with No Candy in My Bluegrass. Hawks’ Outback is an original fiddle tune that sounds like one you’ve heard all your life – it’s that good. Despite the pensive sound of its title, Hiatt’s She’s Gone is barn-burning up-tempo bluegrass. As with all good bluegrass albums, you need a gospel song; Pardue’s You Can Go to Heaven, complete with the assurance that “You don’t have to have a PhD… heaven is waiting for the ones who believe,” fills the bill.

Mickey Galyean & Cullen’s Bridge have produced an outstanding album that will delight young and old fans of mountain music alike.