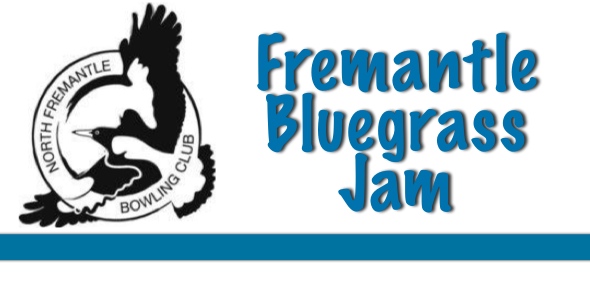 It’s been about a year since circumstances conspired to put an end to Fremantle’s only public Bluegrass jam. We’ve been missing it. At a recent Ross Nickerson banjo-workshop a couple of months ago a plan was hatched to form a small group of people to start a new jam.

There have been some long talks with Bob White, who ran the old club, and he was able to give lots of useful advice and encouragement. So armed with some of his experience, a few ideas of their own and very little idea of what they’re really in for, they’re ready to launch the “Fremantle Bluegrass Jam”.

They chose the name because it’s a Bluegrass Jam and it’s in Fremantle. (this comes from a master’s degree in marketing)

The first jam will be held on Wednesday 10th of July from 7:30pm to 10:30pm, at the North Fremantle Bowling Club which is at 8 Thompson St North Fremantle. Jams will then occur on the second Wednesday of every month, except in January.

There are plans to run two jams. An “Open” jam and a “Getting Started” jam.

There will be an admission charge of $7.00 to cover the cost of hiring the venue, or you can become a subscribed member for $25.00, which covers admission for 6 meetings.

For more information about the jam and how to find the venue email us at: fremantlebluegrassjam@gmail.com

It’s fun sitting at home and playing, but playing with other people is where things get really good. You’ll learn more in one night’s jamming than you will in a month at home and you come away from each session motivated to practice and extend yourself.

Our venue allows us to run two jam groups, one of which caters for musicians who are new to Bluegrass jamming. You can join the jam that suits you, but please consider the ground rules for the two jams which are shown below.

Want to get involved in Bluegrass Jamming but don’t know where to start? This jam is for you. Tunes and songs suitable to the group are played at a steady speed. The idea is to learn how it all works and how to play with other musicians in a Bluegrass jam. More experienced musicians will sit in to help get things working.

Each month one or two tunes and songs will be announced in advance so that you can practice before hand.

This jam is for experienced players, things can get fast and complicated and it’s not structured.