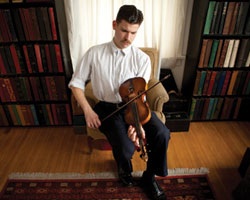 Frank Fairfield is a one-man tour de force, a twenty-five year old Californian multi-instrumentalist (vocals, banjo, fiddle, guitar) dynamo who is resolutely circumventing and re-writing the rules for the folk/”popular” song tradition for the present age.

A torch-bearer for the misunderstood or under-appreciated songs of yesteryear and with an intrinsically linked work ethic of dedication and understatement, Frank is sustaining and rehabilitating this tradition through his powerful and emotional voice, and through his musicianship – his performances on banjo, fiddle and guitar are technically proficient without being showy; somehow simultaneously played with an ease that tacitly encourages the collaboration and continuation of these songs for the centuries to come.

With a mountainous and religious upbringing and ensuing move and inebriation in his formative adult years, Fairfield was “discovered” busking in Los Angeles in 2008. A year later Frank’s music was embraced by a wider audience after the release of a 7” single and self-titled debut album on the Tompkins Square label. In 2011 released his second full-length album, Out On The Open West, expanding his repertoire to perform self-penned songs with guest accompaniment from Willie Watson (Old Crow Medicine Show), Jerron “Blind Boy” Paxton and other luminaries. Out On The Open West is a fascinating artistic statement from Frank, proving that his raw passion and incredible musicianship are equally matched by a magnificent and powerful songwriting ability.

A young Californian who sings and plays as someone who’s crawled out of the Virginia mountains carrying familiar songs that in his hands sound forgotten: broken lines, a dissonant drone, the fiddle or the banjo all percussion, every rising moment louder than the one before it. – Greil Marcus.
Frank Fairfield is the sort of person who makes you feel sort of glad to be alive, so passionate is he about his obsessions from a bygone age. Just talking to him for a few moments makes your heart begin to beat a little slower – The Guardian.

All the while Frank has honed his remarkable live performance with regular touring throughout North America and Europe, with extended jaunts alongside Fleet Foxes, Charlie Parr, and C.W. Stoneking; and been the subject of an acclaimed documentary.

Touring Australia for the first time in December, Frank Fairfield will be appearing at the Meredith Music Festival in Victoria and on select headlining dates along the East Coast. You really don’t want to miss this.