Faux Grass at the Tyers Hall 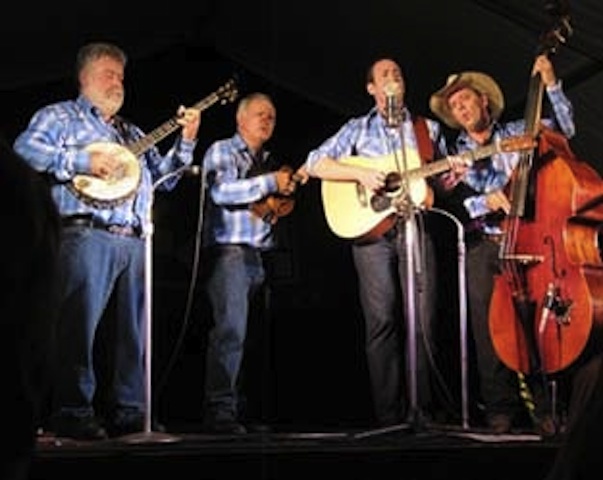 Faux Grass will be featuring at the Gippsland Acoustic Music Club’s concert on Sunday 3rd February, at the Tyers Hall, from 7.30pm.

The group had its origins in February 2011 when Blair Webb and David Aumann, both formerly playing with Fat Chance, decided to pair up as a duo with harmony vocals, guitar and mandolin to play at clubs and coffee shops. Evan Webb (no relation to Blair, although you may hear Blair call him “uncle”) heard about this and asked if we could use a bass player and additional vocalist. Of course we could. Then Jim Golding came up with an offer we couldn’t refuse: “If you need a banjo player, I’m your man.” And Faux Grass as you see it was formed!  Individually, the band members are all experienced musicians. David played with Ragwort and Thistle Bush Band for many years before forming Indigo Rye Bluegrass Band. Blair played for several years with Fat Chance. Evan played with Rouseabouts Bush Band for years and is a current member of Mama’s Mountain Jug Band. Jim Golding, Coolgrass’ banjo maestro, is everyone’s favourite.

Faux Grass has played at all of the major Victorian bluegrass festivals – the Great Alpine Pick, the Beechworth Kelly Country Pick, the Guildford Banjo Jamboree and the Harrietville Bluegrass Convention.

Tight three part harmonies is a band hallmark. The Faux Grass repertoire is mainly traditional bluegrass, but extends far wider and encompasses blues, country, pop and novelty songs. You might find yourself turning to your neighbour and asking “Did they just play Rocket Man?” Well, yes they did! And there’ll be lots of other surprises in store when you hear them play.

The Support Act on the night is the ever expanding group from the Latrobe Valley known as “Ukelicious”, featuring almost 30 people who have been caught by the “ukulele bug”. Cost is $10 members/$15 non members, children/students free.

The night will start with Vocal Nosh led by Judy Wood, commencing at 5.15pm for a 5.30pm start, and then time to enjoy soup, bread, fruit and good company before the first club night gets under way. Cost for Vocal Nosh if $10 adult, $8 concession.