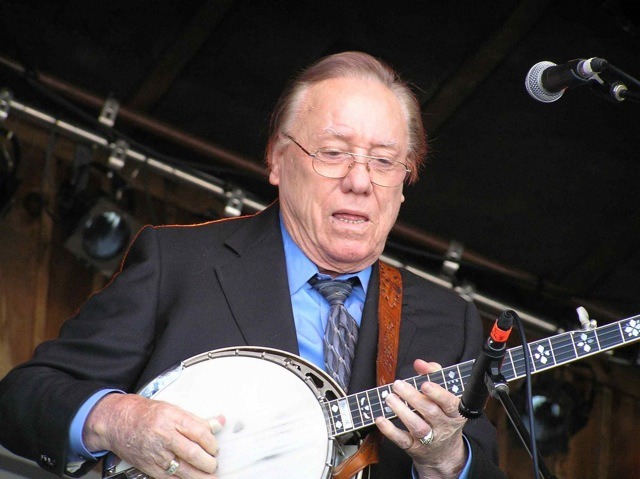 As a preface, I’ll point out that it has long been a peeve of mine (and many others in the bluegrass world) that Earl Scruggs has not been given his due as a major driving force in the development and popularity of bluegrass music. This issue can and likely will be debated for a long time, but the more I learn about bluegrass history, the more I see that his contribution has been minimized by people who focus instead on Monroe – as the “father” (which I do think Monroe was) of bluegrass, and as the one focal point of the entire scene.

Nowhere has this been more obvious than at the International Bluegrass Music Museum – until last Tuesday. Of course this year is exceptional, but the Monroe focus of the museum has long been evident, and while the other greats of bluegrass are present in different places, the contributions of Scruggs, the Stanleys, Jimmy Martin, and so many others, somehow appear quite secondary.

In a recent conversation with Museum Director Gabrielle Gray, I made the case for a public statement to be made to help righten this wrong. She agreed that a statement should be made, and made in Earl’s presence on his rare visit to Owensboro. I wrote up a sample statement, and a few days later, Gabrielle surprised me by asking me to deliver it.

As a great devotee of Mr. Scruggs, I accepted that honor and responsibility, and consulted with others to help me hone it to say it right and with respect to all concerned. Among those I thank for their help are Fred Bartenstein, Kitsy Kuykendall, and Steve Martin.

Here’s the statement, read on Bill Monroe’s birthday, Sept. 13, 2011, in the auditorium of the Riverpark Center, as part of the Legends Recognition Ceremony, with 66 of our finest seated on the stage and a good-sized audience:

As you all know, we are here thanks to the wisdom, work, and vision of the International Bluegrass Music Museum, in the same building asthat amazing institution, almost twenty years old now.

Some people might look at the museum this year and think,understandably, it is sort of the “Bill Monroe Museum”. Given this very special year, we hope everyone understands and is on board with the obvious emphasis lately. And of course we all know how proud Bill Monroe was of being from Kentucky – not far from right here – and named his band after Kentucky, which is what gave our music its name.

But… There is another individual, without whose contribution I doubt we would all be here celebrating this momentous birthday today at the International Bluegrass Music Museum…

A man who, starting at age 21, brought a new fire toMonroe’s music. It was more than “the sound of a banjo”, which had already been a part of Monroe’s music – it was a miracle of what human fingers could do on a musical instrument to electrify listeners. It was a perfect match for BillMonroe’s music – strong, clear, smooth, clean and honest, and filled with the intense fire, beauty, and pride of the South, for all to hear.

The bluegrass sound as we know it today was complete as of December, 1945. Some might call this new sound the “rocket booster” that tookbluegrass beyond the American South… to the whole country… overseas to Europe and Japan, and to the stars, for all time.

We are so proud he is here as part of this event, 66 years later.

This statement, cleared in advance by the Director of the IBMM, and delivered at her invitation, to a highly significant gathering and witnessed by 66 living legends of bluegrass, strikes me as symbolic of an important change of direction and attitude. I hope this lead is followed by historians and commentators henceforth, as it’s long overdue.