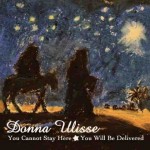 Donna Ulisse has announced the release of her Christmas album which her record label has encouraged her to produce for some time. Donna did not feel she was coming up with a group of songs that made a cohesive album. When she wrote You Cannot Stay Here and You Will Be Delivered in a span of one week, she felt that she had found the direction for an album with the focus being on the songs being written from the point of many characters in the Christmas story.

The songs are now available on Donna’s website Bandbox by clicking Google here They will also be available on several other internet sites including iTunes by Thanksgiving.
Radio presenters may like to download the songs for airplay may get the mp3 files on Airplay Direct.