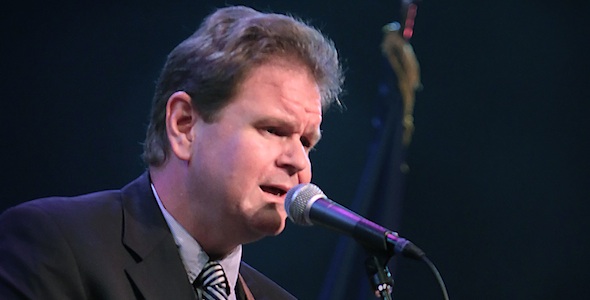 Festival organisers for this year’s Inaugural MountainGrass Festival have announced that USA’s Don Rigsby will be the feature international artist for 2013.

From remote Isonville, KY, to an international following in Bluegrass music, Don Rigsby has remained true to his mountain roots and made his own marks as a powerful tenor and distinctive mandolin player.

Born February 18, 1968, Don Rigsby grew up listening to early Ralph Stanley records and to the high lonesome sounds of his cousin Ricky Skaggs, learning from those who went before him and then adding his own personal touches. Also influenced by the late Keith Whitley, another Elliott County native, Don comes from a family and community of traditional musicians.

He has sung since he can remember, started playing guitar at age 12, added the mandolin and fiddle, and plays dulcimer. For his sixth birthday, Don was taken to the Paramount Arts Center in nearby Ashland, KY, to hear his hero Ralph Stanley perform “Little Maggie” and got an unforgettable bonus when Keith Whitley came out to the audience, hoisted young Don on to his shoulders, and carried him backstage to meet Ralph for the first time.

Don worked his way through Morehead State University playing music with Charlie Sizemore, emerged on to the national scene as a member of The Bluegrass Cardinals, played with JD Crowe and The New South, and was a member of the award-winning Lonesome River Band. The two-time Grammy nominee and two-time SPBGMA Traditional Male Vocalist of the Year shared two IBMA Awards while performing with Longview and sang on a Grammy-winning album by rocker John Fogerty.

Rigsby has released five solo albums. His first, “A Vision,” won the Association of Independent Music’s “Gospel Album of the Year” award and was nominated for an IBMA Award. He received the 1999 Bluegrass Now Magazine Fans’ Choice Award for Vocal Tenor of the Year and the 2001 Governor’s Kentucky Star Award. “Empty Old Mailbox,” the title track from his third album won the 2001 Song of the Year Award from SPBGMA.  This project was followed up with “The Midnight Call”, “Hillbilly Heartache”, and “The Voice Of God”.  In 2005, Rigsby was awarded two IBMA awards for his role as producer of the Larry Sparks project “40” for Recorded Event of the Year and Album of the Year. In 2006, Rigsby and company received another award for Recorded Event of the Year for participating in the “Celebration of Life” project for Saint Jude’s. He continues to be a sought after producer, Session Musician and Singer. He has recorded two albums with Dudley Connell, and continues to record with Midnight Call and Longview. Hisnext solo release is slated for release in August of 2013.It is a tribute to his hero Ralph Stanley. The title is “Doctor’s Orders”and features special guests Larry Sparks, Charlie Sizemore, Ricky Skaggsand Doctor Ralph himself!

In 2001, Rigsby became the first full-time director of Morehead State University’s Kentucky Center for Traditional Music. Through his role at MSU, Don taught vocal harmony classes for the Traditional Music minor, and coordinated classes, workshops, concerts, and school tours by new and old stars of traditional music. He continues to provide instructionboth privately and in various camps across the U.S. and even abroad. He recently released his first mandolin instructional video as well. Don has a rich heritage and lifelong experience in traditional music and continues to propel it into the next generation through his love and dedication to preserving the sounds of old.