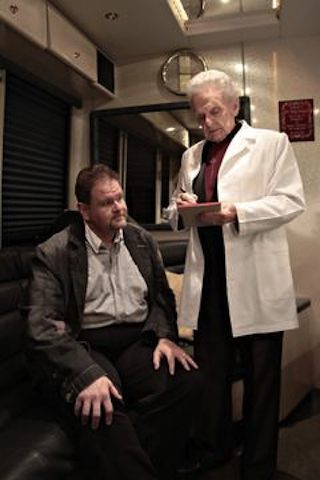 Don Rigsby’s life-long passion for the music of Dr. Ralph Stanley comes to full boil in his forthcoming album from Rebel Records, Doctor’s Orders: A Tribute to Ralph Stanley.

(Stanley has been referred to as Dr. Ralph Stanley since receiving his honorary doctorate in music from Lincoln Memorial University in 1976.)

I’m so proud of the tribute record that Don Rigsby has done for me. He has recorded some of my favorite material and brought new life to each song – Ralph Stanley.

Except for “The Mountain Doctor” (which Rigsby co-wrote with Larry Cordle, of “Murder on Music Row” fame), all the songs on the new album are ones Stanley recorded throughout his 67-year (and counting) career.  Some are rare gems the Old Master seldom or never performed in his stage shows.

Adding zest to the project are appearances by Stanley and former Clinch Mountain Boys Larry Sparks, Ricky Skaggs, Charlie Sizemore and Steve Sparkman.  Stanley’s lead guitarist, James Alan Shelton, plays on many of the 14 selections, as do such other prize-winning pickers as Ron Stewart and Barry Bales.  Rigsby produced the album.

Barely out of the cradle when he became enthralled by the high mournful sounds issuing from his brother’s 8-track tape player, Rigsby was a mature six years old the day he met Stanley at a show in Ashland, Kentucky.  It remains the musical highlight of his life.

Rigsby is a two-time Grammy nominee and two-time winner of the SPBGMA’s Traditional Male Vocalist of the Year awards.  He has performed and/or recorded with The Bluegrass Cardinals, J. D. Crowe & The New South, Lonesome River Band, Longview and Midnight Call.  His credits also include five solo albums and two IBMA awards for producing Larry Sparks’ comeback album, 40.  A graduate of Morehead State University, Rigsby was the first full-time director of that school’s Kentucky Center for Traditional Music.

The first single from the album, “The Mountain Doctor,” will be made available for digital purchase as a special pre-album promotion next Tuesday, 2nd April 2013,  via iTunes, Amazon, eMusic and other digital outlets.  The full album Doctor’s Orders: A Tribute to Ralph Stanley will be released on 21st May 2013.