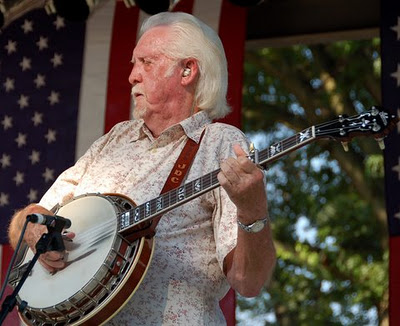 I had heard of this news about JD Crowe  last month but was not able to verify it until recently. It seems that JD Crowe is to be awarded an honorary doctorate by the University of Kentucky in an award ceremony to be held later this year in December. The doctorate has been conferred by the University of Kentucky Board of Trustees and is only the second such award conferred on a bluegrass musician.

To my knowledge, Crowe will be only the second bluegrass musician to receive such an honor from the University of Kentucky  – the first was Bill Monroe, who was granted the degree in 1984 and received it at the June, 1985 UK Commencement ceremonies. Crowe has told me that he is very pleased, but does NOT want anyone to publicly address him as “Dr. Crowe – Dr. Thomas Adler, University of Kentucky.

After a career spanning almost 60 years Crowe announced earlier this year that he intended to retire for touring, although he intends to complete his touring schedule for the remainder of 2012.

The following biography is an extract from JD Crowe’s website:

Banjoist J.D. Crowe was one of the most influential progressive bluegrass musicians of the ’70s. Initially influenced by Earl Scruggs, as well as rock & roll and the blues, Crowe worked his way through several bands during the ’60s, developing a distinctive instrumental style that melded country, bluegrass, rock, and blues. Crowe didn’t receive national exposure until the early ’70s when he formed the New South, but after the release of the band’s eponymous debut in 1972 he became a fixture on the bluegrass scene for the next 20 years.

He was born and raised in Lexington, KY, Crowe picked up the banjo when he was 13 years old, inspired by one of Flatt & Scruggs’ performances on the Kentucky Barn Dance. After that show, he regularly attended the duo’s performances, sitting down in the front row to study Scruggs’ revolutionary picking. Soon, Crowe was playing with various groups in Kentucky, including an outfit that also featured Curley Parker and Pee Wee Lambert. The young banjo player frequently played on local radio stations, and that is where he got his first major break in 1956. Jimmy Martin was driving through Lexington when he heard Crowe on the radio station, and was so impressed with what he heard that he drove to the station and asked him to join his band, the Sunny Mountain Boys. Crowe immediately accepted and began touring with Martin. While he was in the Sunny Mountain Boys, Crowe didn’t stick to a strict bluegrass set list – he often added rock & roll songs to his repertoire.

Retirement from the road proved somewhat of a selective decision for Crowe, however, and he continued to head the New South’s ever-varying lineups, both live and in the studio.